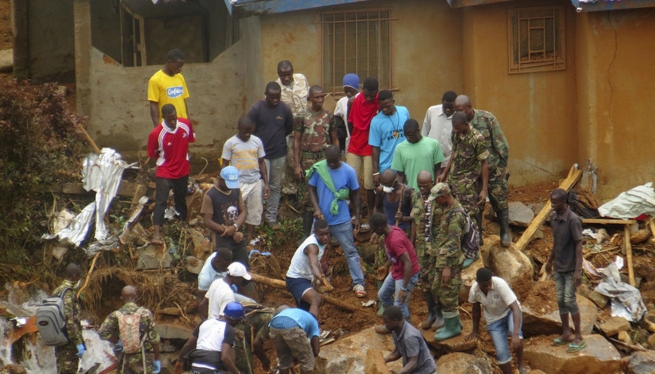 (ANS - Freetown) - Freetown, the capital of Sierra Leon, lies between the mountains and the sea, in a country with the entire continent's highest rate of annual precipitation. The rainy season on Sierra Leon's capital is very long and therefore it is not surprising that the city is accustomed to flooding. But the rains that hit the city on Monday, August 14, have caused nearly 400 deaths, hundreds of people missing, death and desolation everywhere. What are the Salesians doing in this situation? As during the Ebola epidemic, they are among the first to respond, and now commit themselves to accompanying the children affected.

The intense rain recently fallen upon Sierra Leon caused the mudslide on Mount Sugar Loaf in the Regent District on the outskirts of Freetown. The mudslide occurred at 6 am, when most of the victims were still sleeping; hence, the disaster was greater, and the chances of finding the survivors minimal.

So far, about 400 corpses have been recovered, more than 600 are missing and about 3,000 people in various ways have been damaged by the floods. Once again, as during the Ebola epidemic, and following the fires of the Angola Town slums, the Salesians have set off to help.

Through the  "Don Bosco Fambul" center, at the request of the Government, they are  welcoming children who have lost their families or simply have nowhere to sleep.

"The situation is now of total chaos. Sierra Leone is not ready for these emergencies and the government is overwhelmed. There are just a handful of machines to remove the earth and mud so rescue work is done by hand," says Fr. Jorge Crisafulli, Salesian, Director of Don Bosco Fambul.

"I have visited hospitals and we do not know how many children are in care and how many are left alone," the Salesian continues. "I will go to the avalanche site to see if there are children who are lost or without family or friends."

"In a few days we will have a clearer perspective on what is required, but even now it is clear that there is a need for medication, clothing and food. These are the basic necessities for the care of the children in this first phase of the emergency," Fr. Crisafulli concludes.