Sierra Leone - "We have started receiving survivors": an endless story of death and suffering 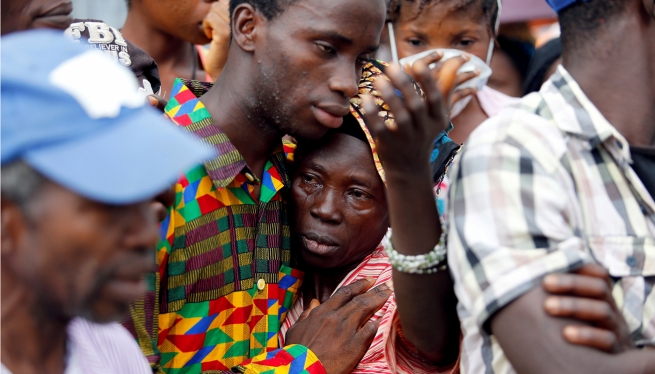 (ANS - Freetown) - While the world is talking about attacks in various parts of the globe, the deaths of Barcelona, Spain, and the situation of insecurity in numerous parts of Europe, death and destruction have devastated areas of Sierra Leone where, in Freetown, the poor and forgotten live. "We have begun to receive the survivors," writes Salesian P. Jorge Crisafulli who, with the Salesian community, works to help the survivors with all kinds of needs.

Newspapers report of of "a catastrophe." Thousands of people have lost their homes after a landslide that killed at least 400; food, shelter, and medical assistance are urgently required, while measures are being taken to try to prevent epidemics such as cholera and typhus.

Fr Crisafulli writes that there are "500 victims, including many children, more than 600 missing and between 3,000 and 5,000 displaced and homeless persons."

"We have begun receiving survivors: 46 children, some hurt during avalanches and floods. Others have lost a parent, or both their mothers and fathers. We have also received women and teenagers, who are the most vulnerable. Because of a wound, a boy's foot had to be amputated. Between today and tomorrow, we hope to receive 146 children and 81 mothers, many with their own children. The government asks us to accommodate the displaced persons for two months to allow them to find a permanent solution for the homeless. They have lost almost everything. The mud, the avalanches and floods occurred during the night and at dawn when people were sleeping."

"Many people ask God," continues P. Crisafulli, "Why Sierra Leone again? Why so much suffering and so many deaths of innocent people: civil war, the Ebola epidemic, fires, floods, landslides..."

"The problem is that no one asks themselves where God is," the Salesian continues. "Because they know that God is in the midst of their people, suffering in every orphan child, in every person who has lost their loved ones, in every family that has remained homeless."

"I am still impressed by the people's capacity to suffer and be supportive. I have seen people dig with their own hands to save victims, or recover the corpses of a loved one."