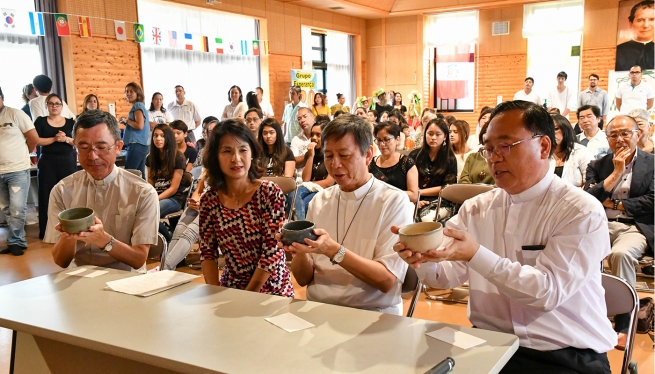 (ANS –Tokyo ) - 19 August 2017 - Archbishop Savio Hon Tai Fai SDB, Secretary of the Congregation for the Evangelization of Peoples visited Japan from 12th to 19th August, 2017. The main purpose of his visit was to participate in the “2nd Papa Francesco Volunteer Service Camp” being held in Nagasaki since 16th August.

In his sharing with the youth, Archbishop Savio, proposed the newly Blessed Takayama Ukon, St. Francis Xavier and Matteo Ricci, the missionary to China as inspiration, encouraging the youth on their life journey, emphasizing the importance of friendship while growing in virtue and wisdom.

Archbishop Savio visited the international parish of Hamamatsu run by the Salesians, the Bible Camp on the shores of Lake Nojiri, and met some members of the Salesian Family in Nagasaki. In Hamamatsu, he participated in the amiable sharing with the vibrant community, had an experience of the “tea ceremony” by a Japanese parishioner, and at Nojiri saw the vocational ministry effort of the Salesian Province, and had a brief visit of the girls’ camp run by the FMA sisters.

In an interview, a few hours before leaving Japan, Msgr. Savio spoke of two major challenges that young people face today: “Respect for life” and “Identity”.  Commenting on the high suicide rates among the youth, he mentioned about their superficial and disoriented life which create identity crisis. He exhorted the members to accompany the young with the Gospel, helping them to discover life to the full as per the exhortation of the Holy Fathe,r and to walk along with the young coupled with family spirit, conveying God’s love for them, using the preventive system of education proposed by Don Bosco.