Brazil - "America has been privileged with Don Bosco's relic in Panama and Brazil": urn blessing in Brasilia 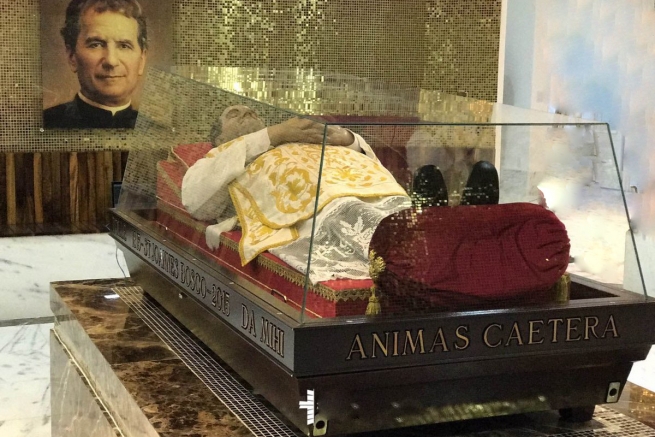 (ANS - Brasilia) - The crypt dedicated to the "Saint of Young People" was inaugurated on August 27 in the Shrine of Don Bosco in Brasilia. Hundreds of young people gathered to celebrate this great event. "America has been privileged with the Relic of Saint John Bosco in Panama and Brazil. Inside the urn is a piece of Don Bosco's right arm, the same arm he used to bless, serve, reconcile, and remove thousands of young people from poverty. We want Saint John Bosco to be imitated in his love for Jesus Christ, "said Fr Orestes Fistarol, Provincial of Belo Horizonte.

On Sunday, August 27, there was the blessing of the crypt of the Don Bosco Shrine. To celebrate the event, a meeting of the Salesian Youth Movement was organized with the presence of 300 young people from six Salesian Provinces and nine from the FMA. Once they reached the Brasilia Cathedral, young people took the urn to bring it to the Don Bosco Shrine. Another 300 young people joined SYM members and walked the 3.5 km journey together to the Sanctuary with the Urn.

"It is a day of thanksgiving to God," Cardinal Rocha said in the homily, "for the Salesian Family and especially for the Salesians, for the good they do, for their presence and for the mission among the young. The Shrine is a pilgrimage site, a home of open doors, a welcoming family, and a place to meet the Saint beloved in Brazil: Don Bosco."

Fr Orestes Fistarol declared his thanks for the gift of the Urn and urged the creation of a civilization of love, as Don Bosco did in Turin. "The story of this capital is bound to Don Bosco. When the city began to develop, the Salesians arrived to accompany the people." Turning to the Cardinal, he made a request, "that Don Bosco be co-patron, together with Our Lady of Aparecida."