Slovakia – One month from now, the beatification of Fr Titus Zeman, martyr of communism 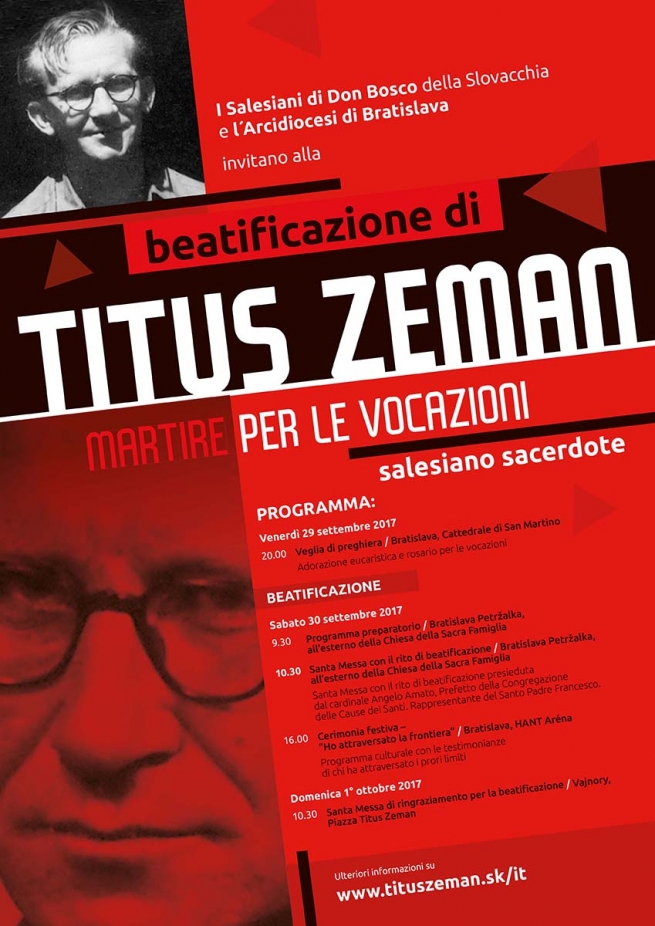 (ANS - Bratislava) – For the first time in the Congregation's history, a Slovak Salesian will be beatified. In Bratislava, a month from now, on September 30, Fr Titus Zeman will be proclaimed blessed. A martyr of communism, he rescued about twenty clerics and priests accompanying them in their walk across the border to Turin in Italy, why the Czechoslovak Communist regime arrested, tortured and tried him as a traitor to the homeland and a spy for the Vatican, sentencing him to 25 years in the country's toughest prisons, the cause of his death.

"In him, we have the man with whom all our doubts about the possibility of living the Gospel in difficult times dissolve. He lived the Gospel in hard times. Fr Titus Zeman provokes us, warns us, and lovingly encourages us to decide, at any time, for the beauty of the Gospel and to live the Gospel," said Archbishop Stanislav Zvolenský of Bratislava.

The weekend-long program for beatification was jointly prepared by the Salesians of Slovakia and the Archdiocese of Bratislava. The initiatives begin on Friday, September 29, at 8 pm, with a prayer vigil at the Saint Martin's Cathedral in the capital, Bratislava. The Mass wherein Titus Zeman will be proclaimed blessed takes place on Saturday, September 30, at 10.30 am in Bratislava - Petržalka, in an open area beside the Church of the Holy Family. In the afternoon, there will be a celebration in honor of the new Blessed at HANT, the Arena of Bratislava. On Sunday, October 1, a thanksgiving feast will be celebrated in Vajnory, the city that gave birth to Fr Zeman.

The web page www.tituszeman.sk – also in Italian, English, Spanish - offers further information on Fr Titus's life and beatification. There is also a short film that presents the blessed's life.