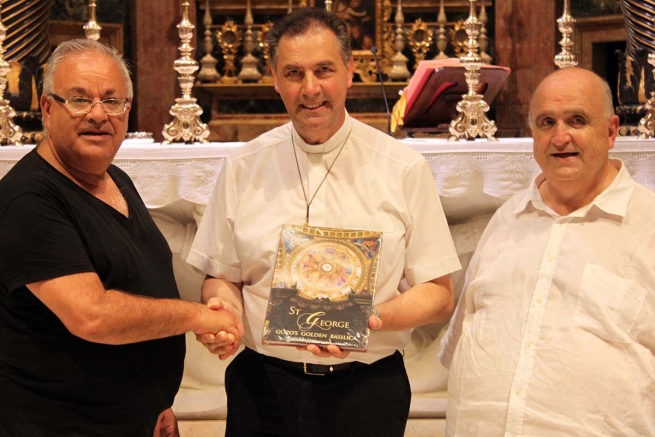 (ANS - Gozo) - The Rector Major, Fr Ángel Fernández Artime, is currently engaged in Malta for an Animation Visit to the local Salesian Family. Last Saturday, September 9, he paid a courtesy visit to Gozo, where a Don Bosco community was active until the late 1960s and where, thanks to the presence of the Daughters of Mary Help of Christians, the Salesian charism still persists.

The Rector Major was accompanied by a small entourage of his Salesian confreres and sisters, and included Fr. Eunan McDonnell, Ireland-Malta Provincial, and Fr Paul Formosa, Malta's Provincial Delegate.

The Rector Major was welcomed by the FMA in Rabat where he met with Msgr. Mario Grech, bishop of the Gozitan Diocese.

The visit was followed by Mass at the National Marian Sanctuary of Ta 'Pinu. During the Eucharist, Fr Á.F. Artime invited the Congregation and the Salesian Family to reflect on the role of Mary in their personal lives as a mother who gives her children what they ask of her. "Visiting a Marian shrine," said the Rector Major, "means finding comfort in the arms of a mother. This was exactly the experience of Don Bosco in his mission: she did everything. I invite you all to let your heart rest in the heart of Mary."

The morning was completed by a visit to the Basilica of St. George in Rabat and the "Cittadella", an ancient fortification in Gozo where the Rector Major was able to catch a glimpse of the historical and cultural wealth of the islands of Malta. In the cathedral embraced by the massive fortress walls, Fr Á.F. Artime also prayed on the tomb of Fr Luigi Mizzi, the priest who first brought the Salesian mission to the island.