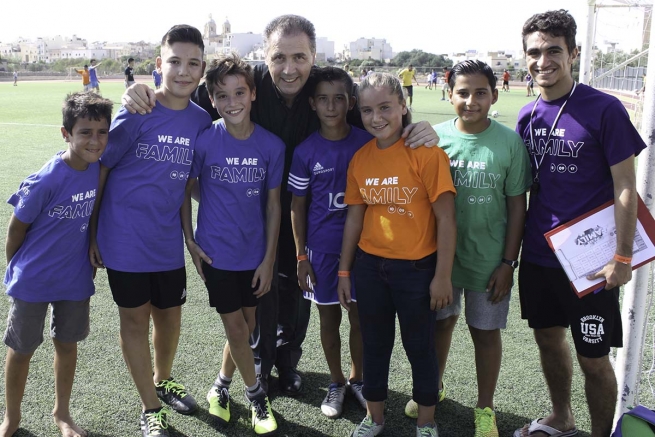 In his typical joking and informal approach, Fr Ángel expressed his joy at being present before such a numerous crowd. After explaining the nature of his work, he went on to listen to a member from each group of the Salesian family as they presented their work and their presence and asked the Rector Major various questions. In his replies, Fr. Ángel praised the positivity and the sense of joy that permeated the atmosphere and warned against a culture of pessimism and despair towards current and future situations. “Complaining is prohibited,” he repeated several times, reminding all present that the only way to live the Salesian spirit is by accompanying the young and understanding them on a personal level because what remains in the heart is supremely more profound. He concluded saying: “My dear Family, we do not give salvation. It is God who gives salvation. Some believe that the world is lost. The world has been saved by God once and for all!”

This meeting was followed by a solemn mass in the Savio College gymnasium where the Salesian Youth Movement had already been gathering in eager anticipation of the Rector Major’s arrival. Accompanied by the Salesian Brigade, the Rector Major was greeted by young and old alike with great celebration and joy. Prepared by SYM and animated by the Salesian Worship Team’s sublime music, mass was a beautiful occasion and a profound experience of communion and unity for the Salesian Family in Malta. In the homily, Fr Ángel emphasized the importance of family in each of our lives. “Which of us carries in his or her heart someone whom we want take care of?” he asked. “Who do we carry in our hearts? If we do carry someone, that means that there’s life; if not, we’re already dead!”

After mass, it was the SYM’s turn to meet with the Rector Major. Fr. Louis Grech, the delegate for Youth Ministry, introduced the respective groups: the youth of the Sliema Oratory, the Dingli Oratory and Senglea Oratory, the vocational groups ‘Friends of Don Bosco’ and ‘Gospa’, the Salesian Brigade, the Salesian Worship Team, the students of Savio College and St Patrick’s, the Salesian Animators, the Savio Athletics Club, SPYS and YES. After this introduction, an energetic and meaningful dance prepared by youth from all of the aforementioned realities served as the opening of the youth encounter.

Dividing the encounter in four parts, the youngsters and the Rector Major shared their thoughts on ‘Playground’, ‘Home’, ‘School’ and ‘Church’ as the four elements of any Salesian presence faithful to the spirit of Don Bosco. Fr Ángel gave concise but profound answers to the youth’s questions and testimonies. Fr Ángel expressed joy at the choice of these four themes for the youth encounter, commenting on how they are a great synthesis of our charism.

The encounter was followed by lunch for all present, after which the young were divided for a few hours of sports and organized games. Despite the fact that the Rector Major’s scheduled visit was over, Fr Ángel spontaneously remained among the youth, informally going around the football pitch, greeting the young, asking them questions, taking pictures and also kicking a couple of balls himself. The day ended with an adoration for all the young present, a great opportunity to give thanks to God for this blessed day and to remind oneself on the centrality of Christ in all life's decisions.

The day after, Monday 11 September, Fr Ángel Fernández Artime met with the Salesian confreres and shared his views on the Delegation and the Congregation as a whole with them.

In the morning, in the presence of the newly-appointed Irish provincial Fr Eunan McDonnell, Fr Ángel met with the delegation council to discuss the current situation. Fr Ángel was presented with the Salesian reality in Malta and had the opportunity to gain a better understanding on the direction in which the delegation is heading.

In the afternoon, all the delegation confreres gathered at St. Patrick’s for a meeting with the Rector Major, in which he shared his views on the Congregation on a global level. Fr Ángel emphasized the beauty of the Congregation. He also took the time to share his experience as Rector Major in the last three years and spoke of the challenges that face the Congregation in today’s world.

The meeting was followed by the prayer of the Vespers and a fraternal supper, during which the Rector Major was given a beautiful image of the Good Shepherd as a token of appreciation and thanks for his service to the Congregation. This brought another busy day of Fr Ángel’s visit to an end.