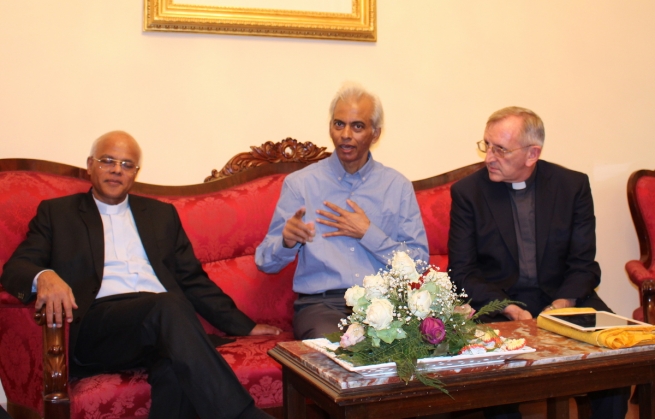 (ANS - Vatican City) - A testimony of impressive faith: that is what the Salesians saw yesterday, 12 September, on meeting Fr Tom Uzhunnalil, finally liberated after being imprisoned for a year and a half.

The meeting began around 6 PM in the Vatican. Present: the Rector Major's Vicar, Fr Francesco Cereda, as the Rector Major was still engaged in his visit to Malta; Salesians of the Vatican community and the General House; and most notably, Fr Thomas Anchukandam, a former professor of Fr Uzhunnalil, who authorized sending the missionary to Yemen when he was Superior of the Bangalore Province.

The greeting was immediately fraternal: Fr Uzhunnalil was honored with the "ponnada", the dress traditionally consigned to special guests of honor, and he received the emotional embrace of all those present. For his part, the Indian missionary did not nothing but repeat words of thanks, first of all to God and the Madonna.

One of his first requests was to pray in the chapel of the Salesian community in the Vatican. He also wanted to celebrate Mass immediately after, but due to necessary medical examinations he was forced to postpone the fulfillment of his wish. Nevertheless, before the arrival of the medical staff, he asked to be confessed, since this had obviously not been possible throughout his time in prison.

Different, instead, the discourse for the Eucharist; during the festive evening offered him by the Salesian community, featuring traditional Indian foods, Fr Uzhunnalil said that throughout his time as hostage he continued to spiritually celebrate Mass every day, remembering by heart the readings and the parts of the Mass, since he did not have liturgical texts or species with which to celebrate.

For his part, Fr Uzhunnalil appeared calm and open to questions; without going into details he answered the questions of his confreres. He confirmed he was in the chapel of the community of the Missionaries of Charity of Aden when the assailants kidnapped him. After being kidnapped, Fr Uzhunnalil said he was never mistreated and that following his rapid weight loss, his kidnappers had even begun to provide him with the medication he needed for his diabetes.

Throughout the period of imprisonment, however, he wore the same clothes; with his kidnappers - who spoke Arabic – he communicated with a bit of English; and during his imprisonment he was transferred two or three times, but always blindfolded.

"I never thought I could be killed," said the missionary who also recalled an episode on March 3, 2016, the night before the massacre: the Director of the Missionaries of Charity house of Aden, commenting on the difficult situation in which the religious found themselves in the war zone, had said it would have been nice to be martyred all together for Christ. But the youngest of the religious - who then survived the attack - replied: "I want to live for Christ."

Fr Uzhunnalil is currently being hosted in the Salesian community of the Vatican. The Salesian Congregation has taken such a decision by considering it the most suitable place to ensure his care and allow him full recovery.