United States – Salesians face off with Irma in Florida 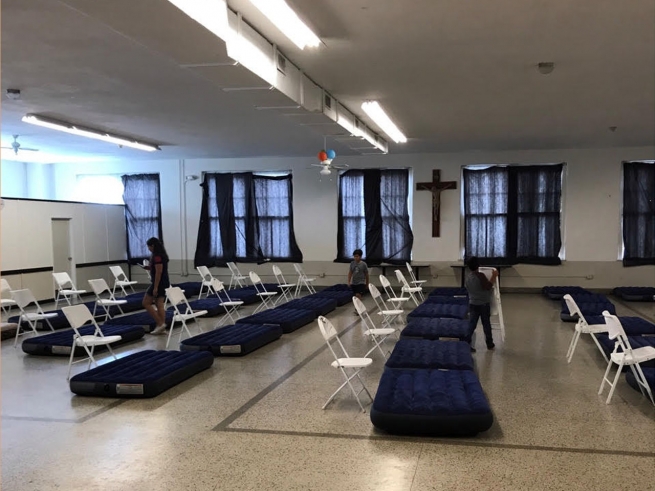 (ANS – Tampa) – “I am requesting that if it is possible we have a Holy Hour sometime today for the safety of all those in the path of the hurricane. Let our prayers be accompanied with personal sacrifice and mortification for this special intention,” Sr. Joanne Holloman, FMA, wrote to the Salesian sisters of the Eastern U.S. and Canada on the morning of Saturday, September 9, with Hurricane Irma expected to arrive in southern Florida by that night. She also assured the Florida sisters of “the support of our love and prayer.”

The sisters serve at two schools in South Florida, viz., Immaculata-LaSalle High School in Miami and St. John Neumann High School in Naples; and at Villa Madonna School and Youth Center in Tampa.

In addition, the Salesian priests and brothers serve at St. Philip Benizi Church in Belle Glade in southern Florida and at Mary Help of Christians Center in Tampa, and their retirement-assisted living home is on the grounds of Mary Help.

In anticipation of the massive category 5 hurricane, the two sisters from Miami—Srs. Kim Keraitis and Clare Kennelly—evacuated to Naples, joining the three sisters there. The five sheltered in the sturdy school building with enough food, water, batteries, and the Blessed Sacrament and thus were prepared when Irma came ashore very close by—reduced by then to a category 3 storm.

Indeed, late Sunday afternoon Sr. Carmen Pena, the local superior, informed Sr. Holloman that the sisters were OK, the building had taken in a little bit of water, and “the Don Bosco statue went down but from what they can see it is not broken.” They were among the millions of Floridians who lost electric power.

Sr. Pena followed up on Monday morning “to say they had no damage to the convent or school building. The greatest damage were the trees and grounds. No flooding.” Sr. Holloman added, “It is VERY EVIDENT that our Lady was protecting Florida.”

The six sisters at Villa Madonna took to the second floor of the youth center, supplied with food, water, batteries, and the Blessed Sacrament. They were without power after the storm passed.

On Monday Srs. Keraitis and Kennelly headed back to Miami to assess the damage at Immaculata-LaSalle, which is sited right on the shore of Biscayne Bay and suffered a lot from Hurricane Andrew in 1992. The sisters found the lights working at their convent.

Sr. Holloman summed up: “It is a little miracle! None of our structures were compromised. Most of the damage was outside. Clean-up has begun, and the sisters plan to reopen [the schools] as soon as they get power.”

Meanwhile, three Salesians from Belle Glade, on the south shore of Lake Okeechobee, headed up to Tampa to be safe with the 20 confreres there. Fr. Matt DeGance, pastor and director at St. Philip Benizi, “secured the property as much as possible,” picked up his parents, who live in Fort Lauderdale, and brought them to the home of friends to shelter from the storm.

Although Mary Help in Tampa is located on a lake, and the lake does come well out of its normal confines when there’s a really heavy rain, the buildings are far enough away from the lake – and the Hillsborough River – that flooding has never been an issue. Past hurricane damage has been the result of winds taking away roofing and downing trees.

The elder Salesians resident at St. Philip the Apostle in Tampa stayed in their home, which was constructed in 2004 up to the latest (post-Andrew) building code and which has two gasoline-powered generators on hand in case the electricity should fail (it happens not infrequently in Tampa); but they were ready to move up to the main building if necessary. One frailer confrere was taken to a nursing home as a precaution.

Fr. Steve Ryan, director in Tampa, describes the 1928 main building as “a fortress—walls are 28-inch concrete.” Parishioners and close friends were welcomed to seek harbor there, using the large dorm on the second floor. Ample food and water were stocked up.

One parishioner, Bridget Costello, messaged on Sunday: “God is so good, isn’t he? We will praise him in the storm! Pray for us, but don’t worry about us. We are safe in our Lady’s house. We will have continual adoration and Rosary going all night with Mass in the morning. Mary Help of Christians, pray for us!”

People were certain that their prayers had been heard when Irma reached Tampa “only” as a category 1 hurricane. No one in the Salesian Family was injured, and there was no serious damage.