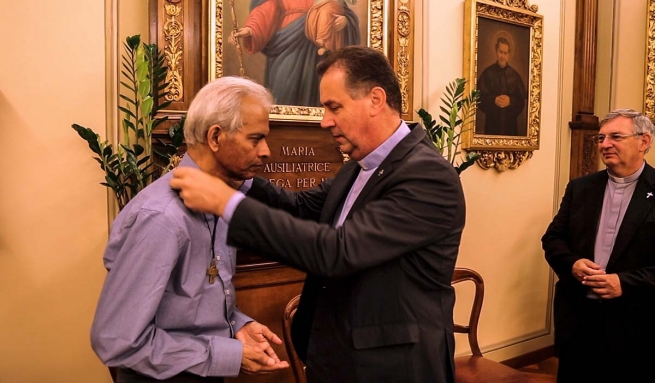 (ANS - Vatican City) - A concrete manifestation of closeness and affection by the Rector Major to "a confrere who was lost, far from us, and who was able to return among us," this the purpose of Fr Ángel Fernández Artime's donating his Salesian Cross to Fr Thomas Uzhunnalil at the end of their meeting at the Salesian community in the Vatican yesterday, September 13.

Seated in front of the painting of Mary Help of Christians, and only a few steps from the Saint and painting of Don Bosco, and before paying homage to the Indian missionary with his cross, Fr Á.F. Artime spoke of the long months of imprisonment: "Many times we have asked the Lord that His will be done and that you never lack inner strength. We can see this has been so." When added he was certain of Mary's continued support by Fr Tom's side, "There is no doubt that she accompanied you every day like a mother," the Salesian missionary nodded with conviction.

After expressing his closeness to Fr Tom's family, the Rector Major handed him his Salesian cross, and spoke of the full value of this gesture. "I want to offer you my Salesian cross, which I always bring with me, so that you can bring it with you. And with this sign, it is a bit as if all Salesians, from today, were with you now and forever."

On ANSChannel, a video of the consignment of the cross.