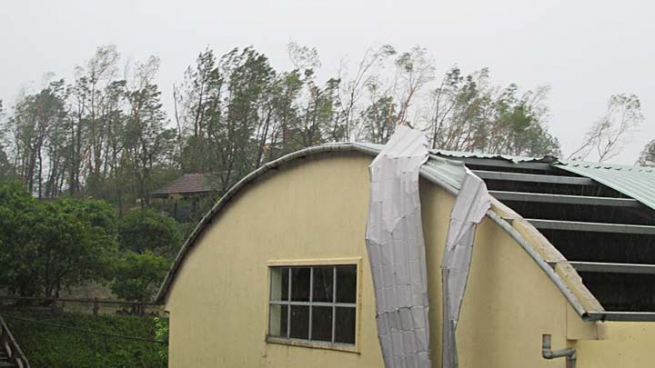 (ANS - Ky Anh) – Exactly as the weather forecast, the hurricane No. 10 was the stronghest hurricanes during the last ten years. It hit to the middle of Viet Nam around 10am September 17 and caused great damage. Don Bosco Ky Anh Technical Center located in Ky Anh District of Ha Tinh Province was at the heart of this hurricane that was why it was destroyed heavily because of the speed of the wind around 150km/hour.

According to the latest estimates furnished by the Vietnamese Authority for Disaster Management, Hurricane N. 10, classified between 11 and 12 on the Beaufort scale, i.e. at the highest levels, has caused 9 victims, 112 wounded, and more than 150,000  homes were destroyed or seriously damaged. In total, six of the country's provinces were affected by the hurricane, with Ha Tinh, along with Quang Binh, one of the most severely damaged.

When the hurricane approached, students were asked to hide in the first floor study hall. The hurricane destroyed the roof of three workshops: metalwork, automotive, and electricity. The hurricane also caused great damage to other items including doors, windows, trees… Fortunately, there was no human loss.

After the hurricane's passage, the towns and sites were left with no electricity or water. It made life more difficult for the school and, especially, its boarders.

Left with the hurricane's devastating consequences, the local Salesians, religious nuns, teachers, and students are now working together towards getting the school operational once again in a show great unity and solidarity.