Puerto Rico - All Salesian structures have been hit by Hurricane Maria 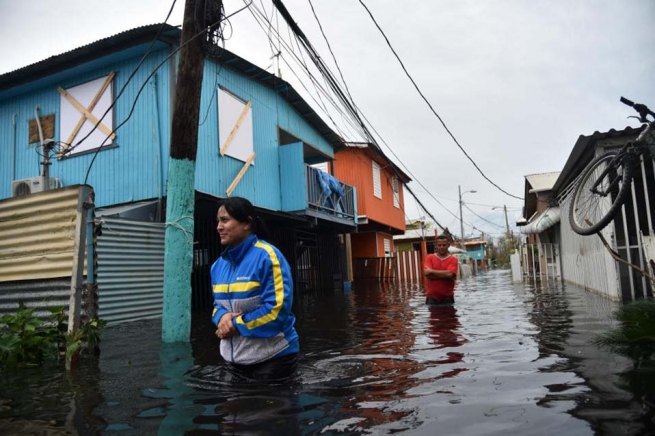 (ANS - San Juan) - The news of the disaster caused by Hurricane Maria has been distressing. "Puerto Rico under shock for the magnitude of the disaster," wrote El País, which confirmed what Governor Ricardo Roselló had said: "This is a major disaster. No doubt." The economic losses will amount to billions of dollars, according to Jennifer González, Puerto Rico representative at the United States Congress, who said: "We have never suffered a devastation like this." There are no Salesians among the victims, but all Salesian centers in the country have been damaged.

On Friday afternoon, September 22, returning from Santiago de Cuba, Fr Francisco Batista, Provincial of the Antilles - Province to which Puetro Rico's Salesian centers refer to - was able to communicate with Fr Nicolas Navarro, parish priest of the Church of Mary Help of Christians in the Cantera district in San Juan, the country capital. "There is no structure that has not been hit by the hurricane. Electric poles and telephone service have fallen, as have a large number of trees which were knocked over by the hurricanes," he commented.

All the telephone companies towers were hit, so there is no telephone and Internet communications in most parts of the island. From the Province it is difficult to communicate with Fr Jorge Santiago, Director of the Cantera Center, and Fr Nicolás Navarro.

In Cantera, the center's football field was seriously damaged; in the parish church, some of its windows have been smashed; meanwhile, work to extract flood water from inside the church has been going on for two days.

The young people working as vocational volunteer at the center were sent back to their families before the hurricane's passage.

While conducting a survey to evaluate damages incurred, the Salesians in the Cantera area met with the Missionaries of the Charity of Mother Teresa, who were busy helping locals in need. The Salesians have invited the religious to their centers to offer meals and to celebrate Mass.

To date, there is no news of the Salesians of the centers of Aibonito, Orocovis and Aguadilla.

The Don Bosco Salesian Foundation, in contact with the Salesian Missionary Procuratorate of New Rochelle, United States, has begun organizing aid relief initiatives for the centers in Puerto Rico.