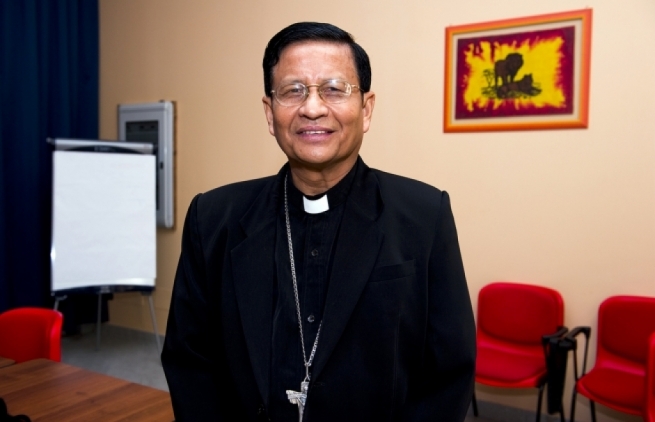 (ANS - Yangon) - The visit of Pope Francis, the situation of minorities in the country and the drama of Rohingya refugees, the delicate position of Aung San Suu Kyi, the Nobel for Peace and today minister in the Burmese government, the role of the Church in Myanmar's society: two months from the papal journey to the country (27-30 November), the first Burmese Cardinal of the Catholic Church, Salesian Charles Maung Bo, Archbishop of Yangon, spoke on many current issues.

The Salesian welcomed the Pope's visit to Myanmar, which has gathered consent from both the authorities and citizens, as "a blessing and a contribution for peace and harmony. For certain, most people are hoping for a 'healing visit'. Many Burmese citizens have followed the Pope's visit to Colombia, a country seeking peace within itself."

As for the clashes and violence in the northern state of Rakhine at the expense of the Muslim minority of the Rohingya, the cardinal commented: "The Pope's observations on Rohingya may likely enrage the nationalists," while "Rohingya's supporters expect the Pope to express his opinion." For this reason, the prelate advises the Pontiff to call for "the need of a durable solution, the adoption of non-violent solutions and the urgency of regional cooperation."

On the delicate position of Burmese leader Aung San Suu Kyi, the cardinal states that "she needs full support. (…) Her achievements have been many but they have sunk in the recent events. Her own lifetime she sacrificed to resurrect the country from the ruins of junta misrule of sixty years. It is a great historic achievement. In her fragile hands she holds the dreams of millions of this country." And he also recalls the role of the Burmese leader in "democratizing this nation" and "her commitment to the Panglong Peace Accord" for reconciliation with ethnic minorities where she "is offering spaces for dialogue between antagonistic parties. This process needs full support and appreciation."

Finally, Salesian Cardinal Bo states that "in Myanmar, economic justice and environmental justice can bring enduring peace." To this end, he emphasizes the important role of the Church, which "wants to help build peace through inter-religious initiatives."