Azerbaijan – An FMA Community at Baku 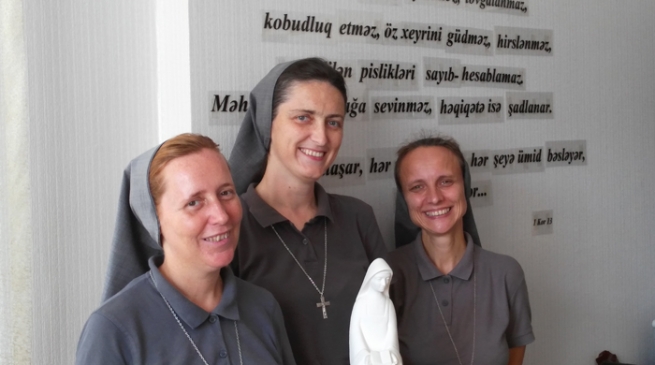 (ANS - Baku) – On September 15, 2017, in the Slovakian Province St. John Bosco (SLK) a new FMA community was constituted at Baku (Azerbaijan), in the Caucasia Region on the occasion of the 140 years since the first missionary departure of the Daughters of Mary Help of Christians to America.

On October 18, 2015, the Daughters of Mary Help of Christians had started a presence in Azerbaijan at Baku, in response to the invitation of Msgr. Vladimír Fekete SDB, Apostolic Prefect in Azerbaijan. The Slovak Province of St. John Bosco (SLK) had sent two FMA: Sr. Slávka Butková and Sr. Andrea Mladošová, who dedicated themselves to parish activities of education and evangelization especially among the young and women, also collaborating in the Social Center managed by the Salesians who have been present in Baku for 17 years.

The presence of the FMA has been enriched by a new member, Sr. Martina Alaxová, and since September was constituted as a community of the Daughters of Mary Help of Christians.

On the feast of Mary, Sorrowful Virgin, they gathered in the Chapel and the Provincial Vicar, Sr. Monika Skalová, read the decree of erection of the community that is under the protection of St. Teresa of Avila, Patron of the Institute.

With the singing of “Let nothing disturb you” and the proclamation of the word of St. Paul (1Cor), the attitudes to assume in the mission were recalled: “My word and my message are not based on persuasive discourses of wisdom, but on the manifestation of the Spirit and of His power…”

Taking a point of the Word of God, the Vicar addressed the sisters, encouraging them to trust the power of God: “God still does great things today as He did through St. Teresa and St. Mary Domenica Mazzarello”. She also recommended that the sisters make time for personal prayer, to discover the joy of each day, and to strengthen communion, and become true missionaries among the people of diverse cultures, religions, and traditions.

At the end of the celebration, Sr. Skalová symbolically consigned the keys to the Superior of the community, Sr. Butková, in remembrance of a Mornese gesture dear to FMA spirituality.

Baku is the capital and the largest city of Azerbaijan. It is the largest port of the Caspian Sea and the largest see of the Caucasian Region. It has about two million inhabitants, among whom 90% are Muslims and 4.8% are Christians.