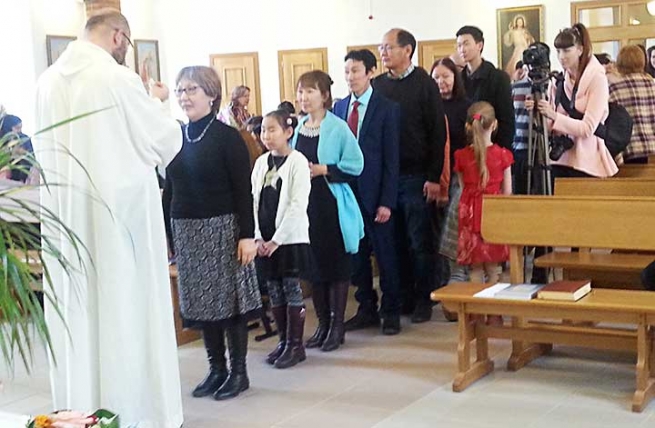 (ANS – Yakutsk) – More than 9,000 km from Bratislava, Slovakia, where the Rector Major celebrated the Beatification of Blessed Titus Zeman with 25,000 faithful and the Salesian Family of Slovakia, a small community of four Salesians (Rector Fr Pavol Michalka) celebrated the Silver Jubilee of this remote Catholic presence of Yakutia in the Church of the Holy Spirit in Yakutsk with 150 Catholics and non-Catholic well-wishers.

The Silver Jubilee celebration started with 11 AM Eucharist in the parish church, consecrated in 2009, presided in Russian by the EAO Regional Councilor, Fr Václav Klement, who expressed congratulations in the name of the Rector Major to the SDB and the parish community. Fr Klement thanked all the missionaries who have worked in Yakutia over the past 25 years as well as all the Yakutia faithful and friends who welcomed Don Bosco and the Catholic community, and participated in its growth.

Mass was followed by a convivial family meal in the nearby Don Bosco Youth Center, which is also a Salesian community residence. Among the 150 participants, the families with small children, of both Russian and Yakuts background,  as well as the overseas domestic workers from the Philippines, and other nationalities. It was indeed a Pentecostal lunch prepared with contributions from all the parishioners.

In the afternoon, a simple musical event was organized with testimonies shared by Fr Jozef Toth (Aldan), and some of the parishioners of Yakutsk and Aldan who contributed to the building of this small parish community. The local parish youth and many professional musicians, friends of the local female organist, contributed to this wonderful moment of gratitude made all the more memorable for the presence and sharing of friends, including Protestant pastors. At the end, Fr. Marian Peciar, the parish priest, expressed his gratitude to all who contributed to what was an uplifting experience.

Since 1992, about 25 SDB and 120 lay mission volunteers from Slovakia shared a few years of their lives for the establishing of the Church in this remote corner of the globe. Since the pioneer times of Fr. Jozef Pravda, in Aldan, until now about 500 believers have been baptized in what is a large scarcely-populated territory between Yakutsk and Aldan, a distance of 550 km. Indeed, the distance to other so-called nearby Siberian parishes measures between 1,500 and 2,000 km – undoubtedly, one the most challenging missionary environments.

The SDB community consists of four Salesian missionary priests from Slovakia – Provincial, Fr. Jozef Izgold, SLK. They are looking forward to welcoming the first two non-Slovak missionaries who received their missionary crucifix at Valdocco, 148th missionary expedition, destined for India and Burundi, due to arrive in a few short weeks' time.