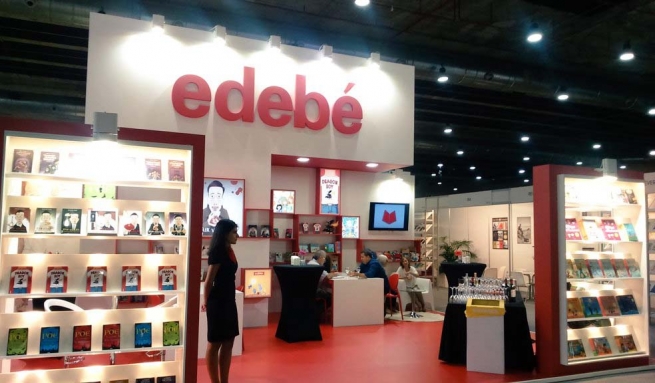 (ANS - Madrid) - The "Liber 2017" International Book Fair opened its doors on 4 October at Madrid's IFEMA Center. About 600 industry professionals from 80 countries meet on October 4 to 6 in the 35th edition of the Spanish-language book fair. Participants included the Salesian publishing houses "CCS" and "EDEBÉ", in Liber 2017 to present their new publications to industry professionals.

"It's a place where we can establish contacts, present new books and plan next year's campaign with distributors from Latin America, and it gives us a chance to review content to fit to each of these markets. (...) We have exclusive distributors in all Latin American countries," said Antonio Garrido, General Manager of EDEBÉ.

"We are projecting the company towards the international market, so our Spanish catalog is known in other countries, such as Mexico or Colombia, where we have developed co-editions with local publishers. This year we were also in the Dominican Republic and have worked in various parts of the Southern Cone of America," said Ricardo Martín, CCS sales manager.

Children and Young Adult literature is one of EDEBÉ's strong points. For this reason, the Salesian publishing house brought Ricard Ruiz Garzón, winner of the EDEBÉ Prize in the "Baby book/Infant Literature" section with the book "La inmortal", to Liber 2017. In his work, the author, originally from Barcelona, highlights a series of values such as "patience, sacrifice, thinking of what you do not see ...". Young people, he added, "should not only be close to issues such as immigration, the role of women or the family, but also reflect on these issues; and books like this can help them do it."

Among the novelties of EDEBÉ is the project "Pastoral in the shoes", a joint initiative of the parishes in the pastoral area.

The publisher CCS is looking forward to its 75th anniversary in 2019, a special occasion to develop new projects with renewed enthusiasm: "We are proud to have reached this goal and we want to celebrate it by introducing quality books centered on the family, in the sectors of education and ministry. We are market leaders in collections for 'Older People' or 'Materials for Educators'," concludes Mr. Martín.