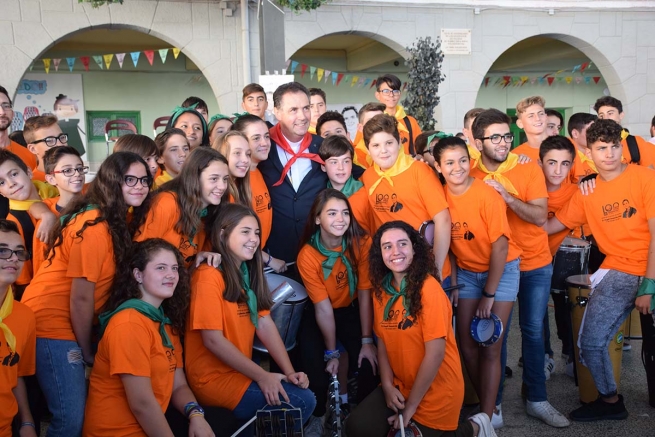 (ANS - Villena) – On Saturday, October 7, Fr Ángel Fernández Artime, X Successor of Don Bosco, was in Villena (Spain) for the celebrations of the first century of the Salesian House of Villena, Alicante province. It was "a historic day for the town and its 35,000 inhabitants," as Fr José Joaquín Coma, said the Director of the House.

Accompanied by his secretary, Fr Horacio López, the Rector Major arrived in the morning, and was greeted by a courtyard full of young people and families. Another important initiative was also taking place: the Solidarity Fair, designed to inform the general public about the activities of the Mary Help of Christians, Spain Province, with particular reference to social platforms and youth centers.

After a tour of the fair's pavilions, Fr Á.F. Artime gathered with the local Salesian Family and together they commemorated the first Salesians who started the presence in Villena. "It is impossible not to remember Pope Francis's invitation to young people: 'make noise' (...). In 100 years this house has been making noise, speaking up and out, in different ways, in the sense of involving others, making themselves heard, of being an open house. A noise where the sense of family is fundamental," the Rector Major added.

In the afternoon, Fr Á.F. Artime met with educators and, later, with Villena Mayor Francisco Javier Esquembre Menor who recalled that the city was enriched by the Salesian presence and their accompanying the local youths.

Before going to the House of Culture to view the "Hundred Years of Education" Exhibition on the history of the Salesian presence in the city, Fr Á.F. Artime received the invitation to sign the City Council's Book of Honor. "I thank you because the very character of Villena's people has allowed Don Bosco's charism to sink deep roots. The Salesians have settled in Villena and have always felt loved. I wish you the best, on behalf of Don Bosco, on the beginning of this second centenary of the Salesian presence," said the Rector Major.

The day ended with the Eucharist. "These hundred years speak to us of a profound understanding and of profound Salesian roots deeply entrenched in this land. We are salt. We are much more than schools. We are answers to today's youngsters. A response built among us all, over time. If Don Bosco came today, he would be happy here in Villena," concluded the Rector Major.