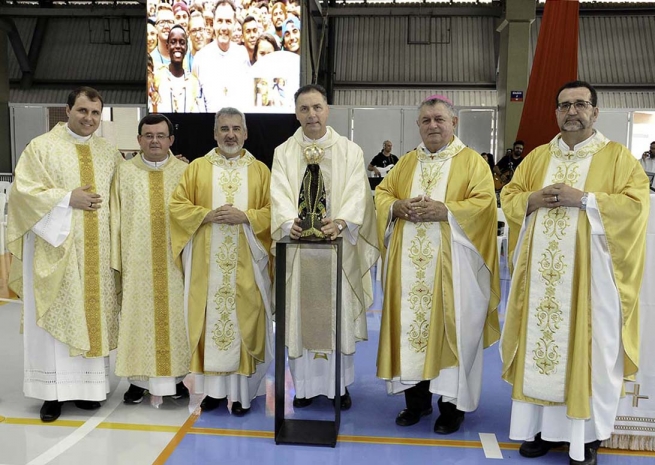 (ANS - San Paulo) - On Saturday, October 14, the Salesian Rector Major, Fr Ángel Fernández Artime, began his Animation Visit at the "Mary Help of Christians" Province in Sao Paulo, Brazil. The first event was the Festival of Salesian Youth (FEST), an annual event that in its 18th edition brought together some 3,500 young people under the motto: "#ComMariaEuVou", or I'm going with Mary.

As in past editions, the festival served to offer children a festive framework wherein to share Salesian spirituality and, at the same time, to give thanks for the services rendered to many young people by the Sons of Don Bosco and the Daughters of Mary Help of Christians of the Province of “Santa Caterina da Siena.”

During the event's opening ceremony, the Rector Major, inspired by the FEST'S Marian theme, said that, like Mary, we were all called to abandon ourselves and to trust Jesus. During the homily, he also highlighted the importance of putting oneself at the service of others: "Whoever does not offer oneself, becomes ill," said the X Successor of Don Bosco.

At the end of the Eucharist, the Provincial Councils of the "Articulação da Juventude Salesiana" (AJS /SYM), wanted to pay tribute to the Rector Major with a book of testimonies of the young people of Sao Paulo, together with performances and exhibitions in honor of the Virgin Mary.

Fr Á.F. Artime, who arrived in Brazil accompanied by the Councilor for America's South Cone Region, Fr Natale Vitali, and Secretary of the Rector Major, Fr Horacio López, will remain until Friday, October 20, in the Province of Sao Paulo, after which he will travel to the Recife Province, in the north-east of Brazil.

Photos of the visit can be seen online on ANSFlickr - Book testimonials, here - Video of the Mass.