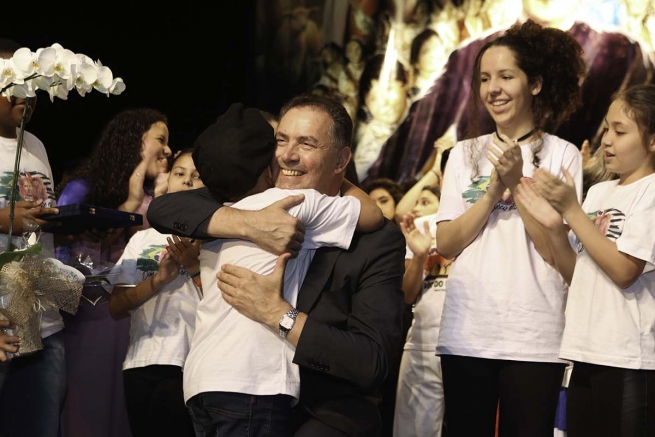 (ANS - Sao Paulo) - On his second day of his visit to the San Paulo Province (BSP), Rector Major Ángel Fernández Artime presided over the Eucharistic celebration in which four young Salesians made their perpetual profession.

During the homily, the Rector Major spoke of the importance of being consecrated Salesians. He said that consecrated life is an attitude of extreme freedom and that the four young Salesians were there because they had lived this freedom intensely. Then he added: "We are not Salesians to live in mediocrity, but to live passionately for Christ Jesus."

After the vows, he emphasized the value of education, training, the closeness families expressed in the formation of the individuals, and to the family members of the neo-professed, the Rector Major said, "Thank you, thank you, thank you."

The Eucharistic celebration ended with the renewal of vows of the Local Center of the Salesian Cooperators of the "Liceu Coração de Jesus", and with a tribute to the Madonna.

In the afternoon, the Rector Major inaugurated the Second Exhibition on Don Bosco: "Utopia and Reality in the Salesian Mission", which took place at the Museum of the Salesian House in Sao Paulo, Brazil. Divided into different environments, the show presents the traces of the Salesian charism in the formation of the Province of Sao Paulo, and the missionary work carried out in various regions of Brazil. Many Brazilian prelates, led by Cardinal Odilo Scherer, Archbishop of Sao Paulo, and many representatives of the local Salesian Family, educators and collaborators of the Salesian mission, attended the exhibition.

The long day's activities ended at the 'Grande Otelo' theater for a show specially designed to homage the Rector Major and offered musical, theatrical and capoeira performances by young people from the schools and social works of the Province.