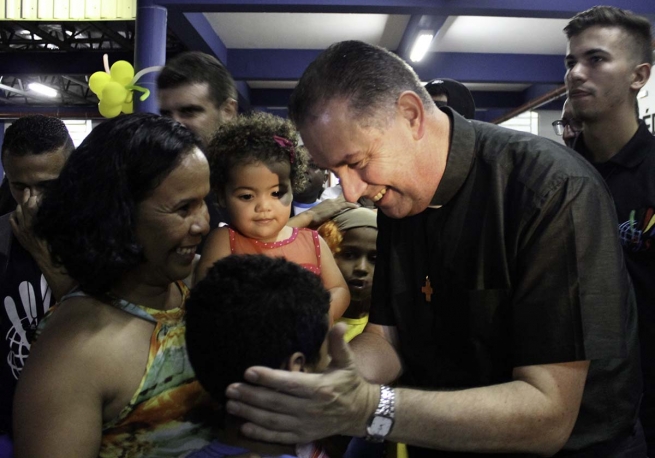 (ANS - Sao Paulo) - The fourth and fifth day of the Rector Major's Animation Visit, at the Brasilia-São Paulo (BSP) Provincial Office, reserved an intense program of appointments for Fr Ángel Fernández Artime. Among the most significant moments: tribute to the venerable Salesian Fr Rodolfo Komórek, and the visit to the headquarters of Cancão Nova, the 25th Salesian Family Group, at Cachoeira Paulista.

The Rector Major began Tuesday, October 17, at the "Dom Bosco" Institute of Americana, where he met the young animators of the "Articulação da Juventude Salesiana", the Salesian Youth Movement of Brazil, who came from the whole surrounding region.

In the afternoon, instead, the Rector Major went to São José dos Campos and visited the memorial dedicated to Fr Komorek, SDB, a Polish Salesian priest who lived most of his apostolic life in Brazil where he devoted himself to prayer and the care of the sick. In the evening, the Rector Major presided over the Eucharistic celebration marking the inaugural commemorations for the 50th anniversary of the parish of the Holy Family, always in São José dos Campos.

The following day, the X Successor of Don Bosco attended a meeting with the Salesian postnovitiates of Lorena, where he also met the BSP Provincial Council. In the afternoon, Fr Artime traveled to Cachoeira Paulista and visited the Cancão Nova to learn more about this Salesian Family group whose main feature is evangelization through the media.

He later presided at the Eucharist before hundreds of faithful, alongside many other priests of the community, including Mgr. Jonas Abib, founder of Canção Nova. "Don Bosco was and is a presence in my life, in Canção Nova. You are Don Bosco here among us!," said Msgr. Abib during the celebration. "He used the media of his time. We are Salesian Family, and today we work with the Lord and for the Lord, with Don Bosco: we really want to use these means of communication as he would use them to announce Jesus and the Gospel."

In the evening the X Successor of Don Bosco again met with children, teenagers, young people and members of the Salesian Family, this time in the "São Joaquim" Salesian Institute of Lorena, for a festive evening in his honor.