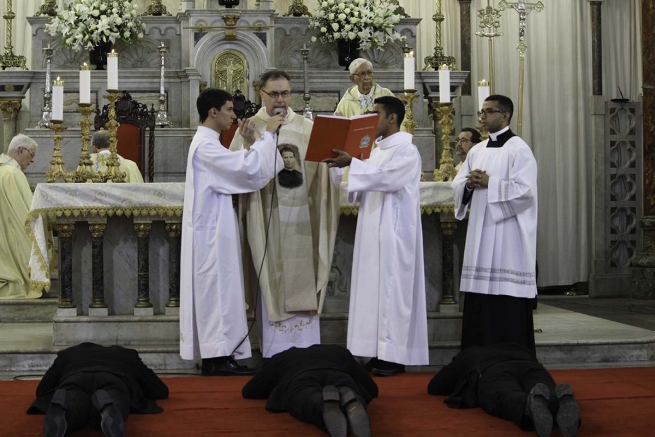 (ANS - Recife) - The Brazilian activities of Rector Major, Fr Ángel Fernández Artime, continued on the last two days with the closing of the Animation Visit to the Province of Sao Paulo and the beginning of his visit to Recife.

On Thursday, 19 October, thanks to the "IV Technology Fair of the East Zone of Sao Paulo", Fr Á.F. Artime visited the the city's Don Bosco Social Center, which accompanies over 5,000 children, teenagers and young people every day. In the afternoon, he met with Salesian educators and students at the Theological Institute "Pius XI". In the Eucharist, he reminded them that "Christianity is not a doctrine, but a personal encounter with Jesus, which translates into an unconditional faith in Him."

On Friday, 20, the last day of his visit to the BSP Province, the X Successor of Don Bosco presided over Mass for the young leaders of the "Articulação da Juventude Salesiana" (Salesian Youth Movement) where he suggested they fully trust in God: "When a young person like you says sincerely in his heart 'God loves me, I am loved by God,' the strength, security, energy that you will receive will always be profound and incredible!" Finally, as the last act of the Animation Visit, Fr Á.F. Artime had the traditional encounter with all the Salesians of the Province.

In the evening of the same day, always accompanied by the Councilor for America South Cone Region, Natale Vitali, and by the Rector Major's Secretary, Fr Horacio López, he began his Animation Visit to the Recife Province.

Immediately after arriving at the airport, where he was welcomed by the Provincial, Fr Nivaldo Pessinatti, he participated in a crowded well-attended press conference, then traveled to the Salesian Institute of Recife where he inaugurated the XXII SYM Festival. The same event saw the Rector Major participate on the following day, Saturday, October 21, where he presided at the Eucharistic celebration, welcomed the perpetual professions of three Salesian youths, spoke with and confessed the children participating in the festival and, in the end, also attended the evening vigil.

On ANSFlickr, photos of the two Visits are available.