Brazil - Visit of Rector Major: beginning of the week devoted to Salesians 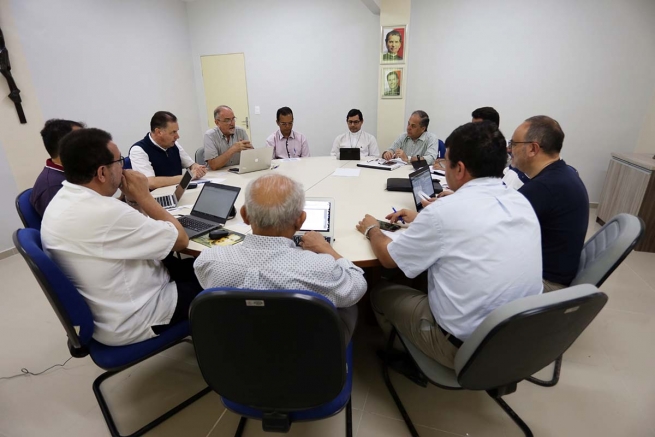 (ANS - Recife) - The Rector Major, Fr Ángel Fernández Artime, dedicated a full day Monday, October 23, to his Salesian confreres of the Brasília-Recife (BRE) Province, where he is currently engaged in his Animation Visit. After the Eucharist in the chapel of the Provincial House, which was also attended by its lay collaborators, the whole morning was spent in meeting with the Provincial Council.

First, there was a presentation of the Salesians of BRE, thanks to a video produced by the Social Communication Delegation. Then, Councilors responsible for animation in Pastoral Care, Social Communication, Education and Economics each presented the work being pursued in their respective fields with the Rector Major sharing some thoughts at the end of each presentation. The Rector Major then talked about the animation guidelines for the Province, in harmony with those established during the last General Chapter and the Extraordinary Visit.

In the afternoon there was another by now set feature of the Rector Major's Animation Visits: the meeting with all the Salesians of the Province. Fr Á.F. Artime met 74 of his confreres. After the directors each presented their communities, the X Successor of Don Bosco spoke on several themes, the aim to strengthen the Salesian identity of the Province: the preferential option for the poorest, human growth and maturity via the vocational path, the joint work with the laity...

At the end of the meeting, the Salesians went to Porto de Galinhas to participate in the festival of the provincial community; among the songs and artistic shows of various genres, even the Rector Major, guitar in hand, took part in the festivities - in typical Salesian style.

The next day, October 24, still in Porto de Galinhas, the Rector Major continued to spend time with the Salesians, while a brief meeting at the Provincial House took place in the afternoon with the bishops of the local Church.