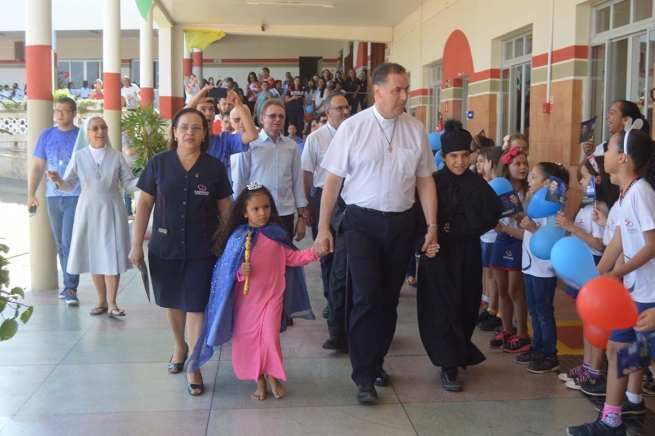 (ANS - Juazeiro do Norte) - In Juazeiro do Norte, State of Ceará, the local Salesian community is preparing celebrations for the 80th anniversary of its presence in the land of Fr Cicero Romao Batista (1844-1934), a very active priest in the defense of the poor and the exploited, why Fr Batista is still very much loved by the local population. In this climate of expectation, celebration and devotion, Major Rector Fr Ángel Fernández Artime was welcomed at Juazeiro on Wednesday, 25 October.

The Salesians came to Juazeiro in 1938, thus fulfilling one of the last wishes of Fr Cicero, certain that "the praiseworthy Salesian fathers" would be offering "much charity" in the region via their work in education and promotion of Christianity among teenagers and young people from Cariri, an inland region near Juazeiro.

Fr Á.F. Artime was welcomed with artistic performances and much affection by students and the educational community of the "Horto do Pe. Cícero" center.  He visited the church of the “Bom Jesus”, under construction for over 20 years, thanks to the donations of pilgrims.

In the afternoon, the Rector Major gave a radio interview on "Padre Cicero Salesian Educational Radio," also broadcast by other radio networks, and he then visited two other emblematic sites and the destination of many visitors and pilgrims: the “Relief Church”, which houses the body of Fr Cicero, and the Museum dedicated to Fr Cicero, in what was his home, now curated by the Salesians.

In the evening, at the end of a day full of spirituality, the X Successor of Don Bosco presided over the Eucharist in the great Salesian Shrine of the Sacred Heart of Jesus in the presence of about 2,000 people.

The last day of his Animation Visit to the Brazil-Recife Province - Thursday, October 26 - began with Mass in the community chapel. Welcomed by a student dressed as Fr Cicero, the Rector Major then visited the local Salesian school, which hosts about 620 students, and blessed the new Children's Unit.

Before boarding the plane to return to Recife – and today, October 27, he leaves for Rome - the Rector Major went to visit a 91-year-old Salesian priest, Fr José Silva Dantas, now at his family home for health reasons.

Available on ANSFlickr, pictures of the visit to Juazeiro do Norte.