Syria - Salesians in a War-Torn Country - 3 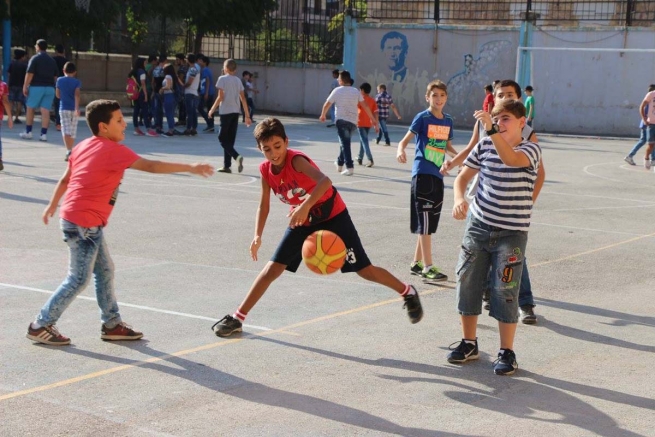 (ANS - Aleppo) - "We left Kafroun and headed for Aleppo," says Salesian Brother Giampietro Pettenon, President of Don Bosco Missions, who visited all the Salesian centers in Syria in October with his team. "Due to the closure of the highway between Homs and Aleppo, still under the control of the rebels in some places, we head towards Raqqa and after about three hours of travel we come across the road from Palmira. Roadside, there are carcasses of burnt and rusted vehicles. We are in a war and it is obvious!"

On entering Aleppo we see destroyed buildings. What remains is only the evidence  of a brutality and inhumanity that cannot be explained. Some buildings are still standing and intact, but there is not one glass pane to the windows anymore. They truly give the impression of being ghost towns.

We arrive at the Salesian oratory of Aleppo. The welcome is warm and familiar. Once again, the young Syrians give us a good testimony of what civilization, good manners, respect for the other, the desire to know each other, and to be happy together.

The Salesian house is located in the center of Aleppo, but in the Western part of the city; for this reason, it has not been besieged by rebels - but it was only 500 meters to the front line of fierce fighting. The Salesians are four. Two just arrived, while the other two have lived here throughout the war years. It may seem strange, but the educational center has never ceased to be a normal oratory. And the extraordinary thing is, indeed, its ordinariness.

The next day we went to the Aleppo districts destroyed during the bloodiest moments of the war. An animator of the oratory meets us and accompanies us to see where her home was. To get there, we cross the houses of others. No need to ask for permission to enter; you pass through a hole in the wall and cross through rooms that are now empty, destroyed.

We see a space that was once a shop, now a stable for goats. Goats in the city! The poor people here survive as they can, and now that the bombs and snipers are silent, they adapt to live as they can. The dusty and gray streets are continually furrowed by people who walk hastily and by numerous children. Even in this hell, life returns.