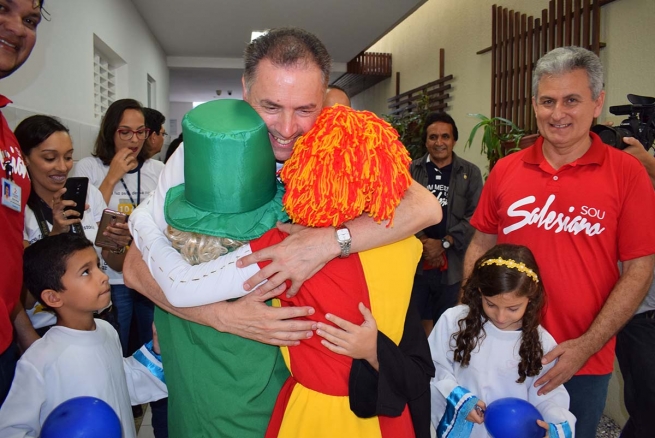 (ANS - Recife) - At the end of his Animation Visit to the Brazil-Sao Paulo and Brazil-Recife Provinces, the Rector Major, Fr Ángel Fernández Artime, returned to Rome, together with his secretary, Fr Horacio López. Meanwhile in the Recife Province, Salesians still taste the fruits of sharing and fraternity experienced with the Rector Major.

Before taking the intercontinental flight to Rome, on the evening of Thursday, November 26, Fr Á.F. Artime returned from Juazeiro do Norte to Natal, where at Parnamirim's Don Bosco Institute he was initially welcomed by about 200 educators and then met the rest of the school staff and numerous students.

His activities continued with a meeting with journalists and, later, he participated in the Regional Seminar on Salesian Education, attended by over 400 educators, where the Rector Major offered the opening presentation.

Finally, the Salesians of Natal and other religious in the Seminary community fraternized with the Rector Major and expressed their gratitude for the Animation Visit. In the early hours of the next morning, Fr Á.F. Artime started his return journey  to Rome.

In the imminence of his departure, Fr Nivaldo Pessinatti, Salesian Provincial of Brazil-Recife, issued the following message:

"Dear friends and admirers of Don Bosco, this past week we have been able to enjoy the friendly and encouraging presence of the X Successor of Don Bosco. Fr Ángel physically crossed Recife, Jaboatão, Juazeiro and Natal, leaving a message charged with Salesian profundity. Furthermore, through social networks, he was also followed and accompanied by thousands and thousands of people who love the way of being and acting Salesian.

He left us concrete guidelines to promote our charismatic fidelity in our beloved Church. We thank God for this precious gift we have received. As we express our joy and our gratitude for the presence of Fr Ángel among us, we want to assure him and Don Bosco of our renewed commitment to the Salesian cause in favor of young people, especially those who are less fortunate.

We also want to thank Fr João Carlos and his team for the brilliant and competent communications and press coverage. Through the media, these words have all reached us all.

We already have nostalgia of the Rector Major!"