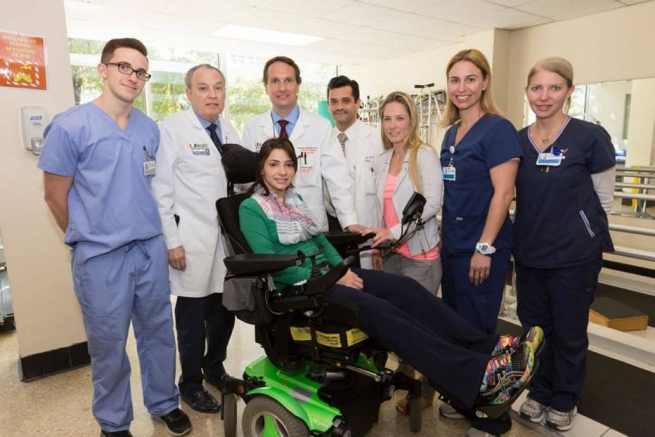 (ANS - Campo Grande) - During the inauguration of the "Fourth Conference of Knowledge in Action" of the Don Bosco Catholic University (UCDB), Laís Souza, former Brazilian gymnast, was presented to the public as a model of courage and strength in overcoming one's limits. At age 25, in 2014, while preparing for the Winter Olympics, she suffered a serious accident in training - she slammed against a tree and remained paralyzed. The doctors foresaw a lifetime of hardship and suffering, but she has learned how to become a positive model for many.

On Tuesday, October 24, Laís participated in a special program at UCDB alongside university professors, collaborators and visitors; she attended a press conference and was learned about two social projects aimed at people with disabilities: "Cogni-Azione" and" Vita Nuova", programs offered free of charge by the Salesian University thanks to the professional work of the teachers of Physical Education, Nutrition, Physiotherapy and Psychology, all committed to improving the quality of life of patients.

The UCDB Vita Nuova project today serves over 100 people. Through physical exercises, the project works to developing autonomy, strengthening muscles and caring for the general health of its patients.

Instead, Cogni-Azione is a project launched in 2011 as a four-year research project; later confirmed and extended, it avails itself of the professional skills of 40 Physiotherapy and Psychology professors. The aim is to examine, stimulate and rehabilitate people with brain damage, memory disorders, language difficulties or disabilities caused by neurological dysfunction that may occur at different stages of life. About 150 patients are currently being served.

"We often have to re-invent ourselves to face the challenges, but we must move on. I think people with disabilities have greater freedom in speaking and pointing out what is right and wrong, and from this everyone can learn. I think many things have improved and there are many people with good will that are changing things, but there is still a lot to do," said the young Lais at the event.