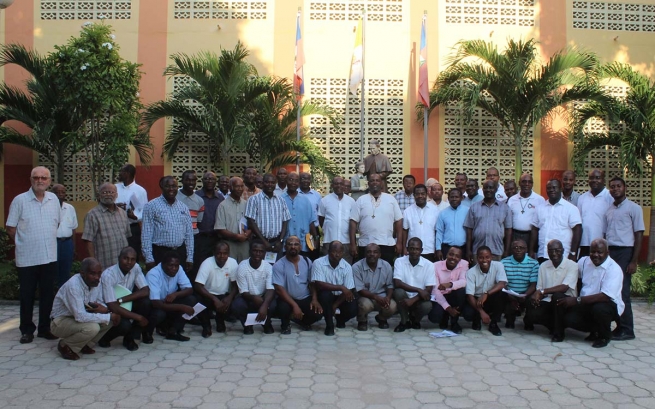 (ANS - Port-au-Prince) – Last October 31, Fr Américo Chaquisse, Councilor for the Africa-Madagascar Region concluded his Extraordinary Meeting with an assembly meeting of all Salesians of the Haiti Vice Province (HAI), a visit, on behalf of the Rector Major, started 14 September.

The Regional Councilor visited every Salesian community in the country as per the program set by the Superior of the Vice Province and his Council. In each of the communities, a preliminary preparation for the visit took place. "The confreres have always been very open, welcoming and helpful towards making the visit possible and enjoyable," said Fr Chaquisse, who interrupted his visit to attend the Conference of Provincials and Vice Provinces of Africa -Madagascar (CIVAM) in Rome from 7 to 16 October.

After thanking his Haiti confreres for his welcome, Fr. Chaquisse pointed out, in his closing speech, that "the Vice Province experienced a dramatic event on January 12, 2010, which struck its history and its growth."

The Councilor for Africa-Madagascar then praised the rigorous commitment, the fidelity to religious discipline, and the sober style of the Salesians in agreement with their work environment. In particular, he highlighted a number of Salesian centers in the country's most difficult and marginal areas. He praised the role of the Rinaldi Foundation, the Planning and Development Office, which does a good job of coordination, accompaniment and training throughout the Vice Province. At the same time, he said there was still work to do to consolidate some of the practices of managing and organizing the documents of each Salesian house.

Finally, Fr Chaquisse gave the Salesians some recommendations to continue fulfilling the Salesian mission in Haiti.

Fr Jean-Paul Mesidor, Superior of the HAI Vice Province, thanked God for the Extraordinary Visit, and called it an occasion of grace and renewal to nourish the lives of the Vice Province's communities and to better serve the young.