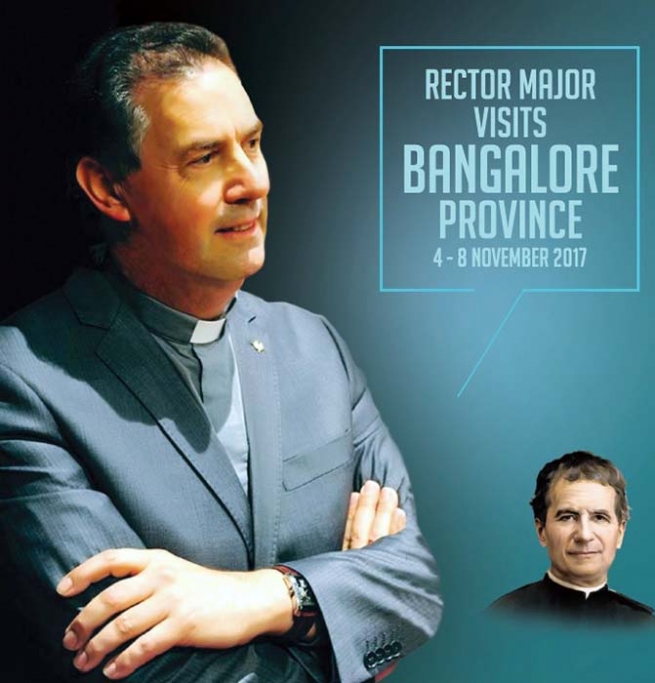 (ANS - Rome) - Fr Ángel Fernández Artime's mission proceeds at a grand pace so he may come to know, first hand, what the Congregation around the world face, and to bring to each his own encouragement as Successor to Don Bosco. Starting tomorrow, 4 November, until Sunday, 12 November, the Rector Major has embarked on his Animation Visit to India's Salesian Provinces of Bangalore, Guwahati and Mumbai.

He will be staying in the Bangalore Province, INK, until Wednesday, November 8, for important meetings and appointments: on Sunday, 5 November, for example, he meets with Fr Tom Uzhunnalil's family, the Indian Salesian Missionary kidnapped in Yemen in March 2016 and released this past September; Monday, 6, he participates in the 50th anniversary of the Salesian Institute "Kristu Jyoti"; while the meeting of the Salesian Provincials of the South Asia region is scheduled on Tuesday, 7 November.

The second stage of the visit is dedicated to the Salesian centers of the Guwahati Province (ING). Among the main events, the 25th Anniversary celebration of the Hatigaon House on November 9, and a visit to the Snehalaya Social Services and Rehabilitation Center in Guwahati the next day.

At the Mumbai Province (INB), the Rector Major will be spending the one and final day of his visit, Sunday, November 12, where, however, he will still have the chance to spend time with the local street children staying at the Salesian home; he will also take part in celebrating two important anniversaries: the 60th of the Sanctuary of the "Madonna of Don Bosco" in Matunga, and the 25th of its annexed Salesian Institute.