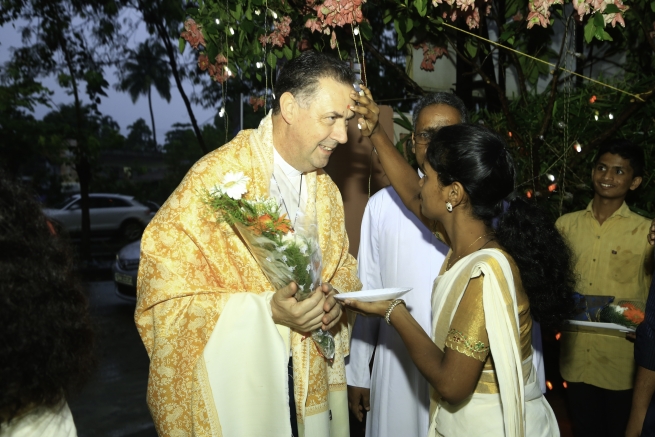 (ANS – Bangalore) – The Animation Visit of the Rector Major, Rev Fr. Ángel Fernandez Artime, to the Province of Bangalore, started on a high note as he landed at the Kochi International Airport at 9.40 am on November 4, 2017.  A rousing welcome in the traditional way was accorded him by the confreres of the Province.

On arrival at the airport, the Rector Major was taken to the Salesian house at Aluva, then spent the evening with the Salesians at Don Bosco Vennala, Kochi. He expressed his happiness in meeting his Salesian brothers and fraternity. In his exclusive meeting with the confreres, he said their beautiful congregation was much appreciated in the Church, and the Salesian work carried out all over the world was in imitation of the Valdocco mission. However, he shard a few concerns and challenges of the modern world that affect the Salesians, such as clericalism, hunger for power and money.

Clad in the traditional local attire, the Rector Major played to the tunes of percussions, folk art and music, spending his time with his brothers in the footsteps of Don Bosco.

Coming together and sharing was the best thing to happen, said the Rector Major as he began the second day with a visit to the province of Bangalore and the Holy Eucharist at Don Bosco Aluva. The Salesian Family members of Kerala region participated in the Holy Eucharist concelebrated by Father Maria Arokiam, the Regional, Father Joyce, the Provincial, Father Tom Uzhunnalil, Father Horacio Lopez, the secretary of the Rector Major, and other Salesian priests. The Rector Major exhorted everyone to be transparent - like Jesus. In an exclusive audience with Fr Tom Uzhunnalil's family, the Rector Major thanked them for their prayerful support and concern during the agonizing days of Fr Tom's abduction.

The Rector Major was spellbound by the unity and faith of the parishioners of Keezhmad, the Salesian parish attached to Don Bosco Aluva. He invited them to live their family life in accordance with faith united by love.

The children of Sneha Bhavan, Valsalya Bhavan and Don Bosco Palluruthy mesmerized the Rector Major with their stunning welcome and stage performance characterized, also, by simplicity and innocence. The Rector Major strummed the guitar to Spanish song and entertained the gathering.

Steering the Salesian Congregation in its mission since 2014, the Rector Major took to the wheel as he enjoyed the houseboat trip in the backwaters of Kochi, the Queen of Arabian Sea. What awaited him was a mammoth welcome at the Valdocco of Kerala, Don Bosco Vaduthala, Kochi. In his presence, with other dignitaries, both spiritual and secular, the Diamond Jubilee celebrations of the Youth Centre at Don Bosco Vaduthala came to a close. The cultural fiesta featured a celebration with special singing of the Rector Major, along with the internationally famous singer Charles Antony, a homegrown youngster of Vaduthala.

No fatigue can dampen the enthusiasm of any Salesian when it comes to being with the young. The Rector Major, the head of the Salesians, showed no trace, indeed, of weariness even after the day's hectic schedule. He leaves for Bangalore on the morning of Monday.