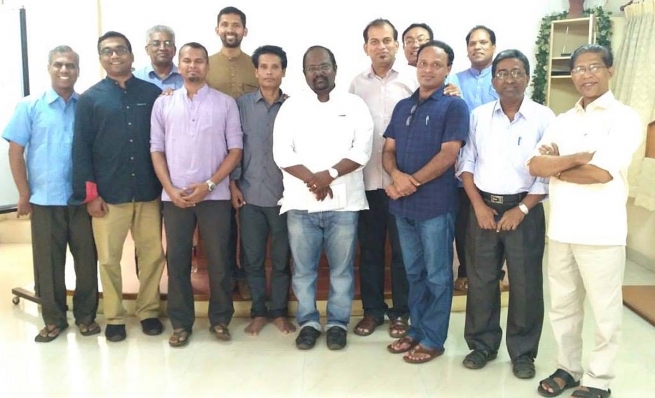 “I was just 7 years when this institution began. Today we need to look back and thank God for Kristu Jyothi College and remember with gratitude the several people who gave their life to it,” said the Rector Major who, incidentally, is the Grand Chancellor of the Salesian Pontifical University in Rome to which Kristu Jyothi College is affiliated. Emphasizing the importance of solid theological formation, the Rector Major opined that if the work is done well in such centers, it will bring permeating quality enhancement throughout all our institutions. Taking note of the sense of social consciousness that  Kristu Jyothi College has always tried to inculcate in its students, he reminded everyone that institutions of this nature must focus on forming in its trainees ‘a heart for the poor.’ “This house must make a reading of the Gospel to serve the poor and needy for the next 50 years now,” he said.

Appreciating the contributions made by the institution in the past 50 years, the Rector Major called on the staff and students to strive for excellence. “Give the best of yourselves and do not allow this institution to grow old,” he said.

All the eleven provincials of South East Asia Region, some of them past pupils of Kristu Jyothi College, the provincials and superiors of scores of institutions across India, and a large turnout of priests, sisters, brothers, co-operators, well-wishers and members of the Salesian family left the hall with a seating capacity of 1200 packed even before the Holy Eucharist began.

In his homily, Fr Rector Major focused on three points. “Be open to the Spirit”, he said.  “Formation is possible only when there is openness to the Spirit.” Secondly, he spoke on the need to have the heart of the Good Shepherd. “If our hearts are full of ourselves, whom will we announce?” he asked. The final point was a call to be servants. “The world is getting fragmented by factors such as a craze for power, corruption, inequality. In such a scenario, our path and style should be different. We should find meaning in service as that is what will move people,” he said.

The melodious singing by the jubilee choir, under Fr Cyriac Thayyil's direction, enhanced the spiritually-charged atmosphere during the Holy Eucharist.

KJC lauded for its contributions

The public function began as scheduled at 6:30 pm, after the Holy Eucharist and a brief refreshment break. The program was presided over by Rt Rev Dr. Bernard Moras, Archbishop of Bangalore, with Rev Fr Angel Fernandez Artime, the Rector Major as chief guest.

The public function began on an emotionally high note with a moment of silence, paying tribute to all those who passed away, giving their sweat and blood for the growth of Krisu Jyothi College.

In his presidential address, Archbishop Rt Rev Dr. Bernard  Moras congratulated Krisu Jyothi College and the Salesians. “In 1967, it was Cardinal Lourde Swamy, the then Archbishop of Bangalore and Fr Aloysious Ricceri, the then Rector Major, who were present at the inauguration of KJC. It’s a coincidence that now, as KJC turns gold, the present Rector Major and the present Archbishop are here,” he observed. “This institution, true to its name and motto, has been shedding light in the Archdiocese of Bangalore, in the Church in India and the global church,” the Archbishop said. Citing the 11 institutions in the Archdiocese of Bangalore where the Salesians work, the Archbishop observed that all those institutions are for the poorest of the poor. “It is the result of your capacity to read the signs of the times and rise up to the challenges,” he said.

Fr Ivo Coelho, past pupil of Kristu Jyothi College and now General Counselor for Formation, in his felicitation speech observed that KJC is a major study center of the Salesian congregation, and so it should be owned up, supported and strengthened. Recalling his experiences at KJC, he said that the Social Service Guild and the street children’s work that had its start from the College were solid proofs of the social consciousness inherent in the theological reflections done. “With great numbers come great responsibilities, too,” he said taking note of the steady numbers of those in initial formation in this part of the congregation.  He called on KJC to move on now to promote consecrated life in general, and not limit itself to Salesian consecrated life only.

Rev Dr. Mauro Mantovani, Vice Chancellor, Pontifical Salesian University, Rome, in his address called on KJC to continue to be a beacon of light, guiding the church in India. He appreciated the institutions and the persons behind the scenes who, from its very inception, concerned themselves with aspects such as care of the marginalized, publications, youth ministry, Catechesis, and faith education.

Fr Maria Arokiam Kanaga, the Regional Superior of South East Asia, observed and lauded the atmosphere of responsible freedom that has been characteristic of the formation imparted at Kristu Jyothi College. He had a special word of praise for the intellectual luminaries shaped by KJC, whose contribution has helped much the Church in India, too. On the occasion of the golden jubilee, he called on the staff and students to study Jesus Christ on a daily basis without ever getting tired of learning theology.

Speaking on behalf of all the Provincials, Fr. Thomas Vattathara, the Provincial of Guwahati, a past pupil of KJC, described the institution as “bigger than anything I have seen in Salesian India.” “KJC has made me,” stated Fr Thomas.

Adding glitter to the golden jubilee celebration, six books were released by KJC Publications on the occasion.  ‘Salesian Sources: Don Bosco and his sources of works’, a translation by Fr Jose Kuttianimattathil; ‘Discipleship: A costly choice’ by Fr Dominic Kaniyantharayil; ‘Philosophical Anthropology’ by Fr Scaria Thuruthiyil; two books by Fr Joy Kaippan, and one by Fr Cyriac Thayyil, the current director of KJC Publications. The Rector Major handed over the first copies to the different Salesian provincials present on the occasion. Fr Cyriac Thayyil informed the gathering that with the present set of new releases, the number of works from KJC Publications has now moved up to 164 books.

The public function of the golden jubilee was interspersed with glittering cultural program. Children of BOSCO (Bangalore Oniyavara Seva Cotta) Bangalore, that has its roots at the ministry began by brothers of KJC, performed a dance, while Don Bosco Chitradurga and seminarians of Don Bosco Tumkur presented patriotic dances expressing their love for Karnataka and India. A jubilee anthem featuring 50 musicians was another attractive performance of the day. A light and sound show depicting the 50 years of growth of Kristu Jyothi College, presented as the last item on the program, topped the day's many events. Fr James Kadankavil, KJC Rector, welcomed the gathering, while Fr Shabu Thottumkal, the principal, expressed his thanks. The celebration concluded with a sumptuous dinner.