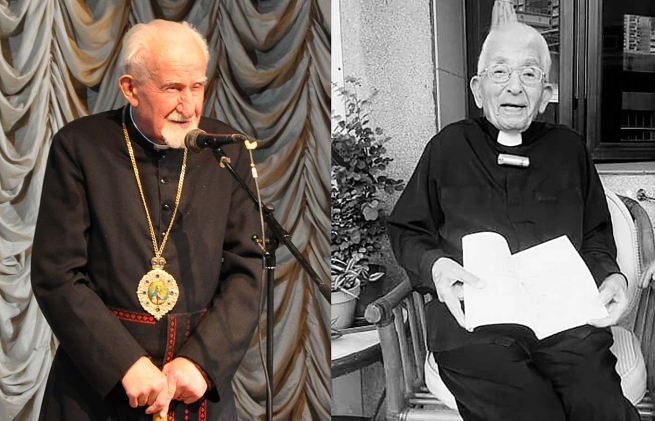 (ANS - Rome) - Two great Salesians, priests and missionaries, who spent their long lives testifying the Gospel even under difficult conditions, were recalled by the Lord on the same day, November 6: Mgr Andrés Sapelak, Emeritus Bishop of the Ukrainian Eparchy in Argentina, passed away at the age of 97; and Fr Gaetano Nicosia, among the pioneers of Salesian missions in China, aged 102.

Born on 13 December 1919 at Ryshkova Volia, now in Poland, Bishop Sapelak was one of the first Ukrainian boys sent to Italy to become  Salesians and then return to their country as founders of the Salesian charism in Ukraine. Having completed his studies in Turin he was ordained priest on  29 June 1949. In 1951 he was appointed Rector of the Ukrainian junior seminary first in France and then in Italy.

He was ordained Bishop on 15 October 1961 in St Peter’s Basilica in Rome, and appointed Administrator Apostolic for the faithful of the Byzantine-Ukraine Rite in Argentina, a position he held until 1997. In 2001 he returned to Ukraine, to Verhniodniprovsk, where he opened a small parish and an oratory. Author of numerous publications in Ukraine and Spanish, he took part in the Second Vatican Council.

Fr Nicosia was born on April 3, 1915, in San Giovanni La Punta, province of Catania, Italy. On November 11, 1935, still to make his first profession as a Salesian, he began his mission in Hong Kong and Macao. In 1958, he went to Ka Ho, Macao, to treat patients with Hansen's disease (leprosy). Thanks to the use of Western medicine and his tireless dedication, patients started receiving medical care and the disease eventually disappeared from the village.

Fr Nicosia also helped a great many of these sufferers to overcome the stigma they suffered and to help them reintegrate into society. Among the many beneficial works carried out was the construction of a school and a hospital for the disabled, always in Macau.

A missionary for over 80 years, devoted to catechism and wholly oriented to living Don Bosco's "Da mihi animas", Fr Nicosia passed away surrounded by a dozen Salesians and Daughters of Mary Help of Christians, who prayed around his bed, and receiving the blessings of Salesian Provincial in China, Fr Lanfranco Fedrigotti, and of the Emeritus Bishop of Hong Kong, Salesian Cardinal Joseph Zen Ze Kiun.

A documentary dedicated to him was released in 2015: "Father Gaetano Nicosia, the Angel of the Lepers."