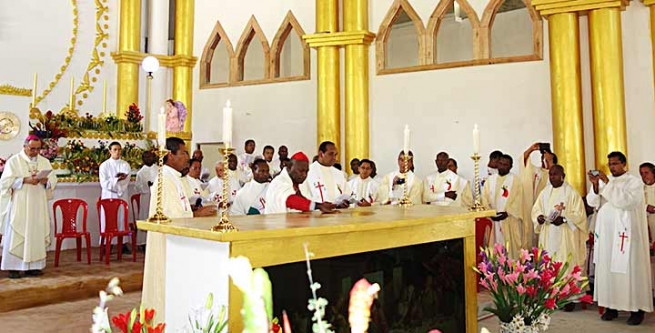 The entrance procession was led by the Simbu locals and students group in traditional attire. The workers who toiled to build the shrine for the past three years were next in line. Forty priests then followed the cross bearer and the altar servers to the church.

At the entrance of the shrine, Bp Anton Bal, Bishop of Kundiawa, welcomed the gathering and thanked the ones who had in different ways assisted in the building of the shrine. “The institution caters to young people and serves a need. Over the years, Don Bosco Simbu Technical College has given young people an education, with the right Catholic values and attitudes. This is most needed in society today,” said the bishop. The ribbon at the entrance of the shrine was jointly cut by Fr. Alfred Maravilla sdb, Provincial; Bp. Anton Bal, Bishop of Kundiawa and Mr Bari Palma, MP for Kerowagi.

Fr. Robinson Parapilly sdb, Rector outlined the background of the presence of the Don Bosco Institute of Technology, Simbu. He then spoke on the educational system of Don Bosco, the Preventive System, based on Reason, Religion and Rapport. “With a blend of education and religious activities, every Bosconian is formed into 'Good Christians and Honest citizens'.” To honor Don Bosco, the great miracle worker and friend of youth, the Salesians decided in 2015 to build a shrine in his honor,” said Fr. Robinson. He expressed his gratitude to God and Our Blessed Mother for their guidance and protection and thanked all who contributed to the building of the shrine.

Cardinal Ribat then sprinkled holy water, blessed, and later dedicated the shrine. The doors were opened and every available space was filled with the congregation that numbered about 3,000 people.

In his sermon, Cardinal Ribat reflected on Luke’s Gospel passage. “Zacchaeus”, he said, “climbed the tree in search of Jesus.” He encouraged young people to search for Jesus, and praise and thank God for His gifts. Being in the ‘Year of Children’, he reminded the congregation to care, protect and catechize children. He also invited the congregation and young people to respect women and address the issue of gender-based violence. The Cardinal then dedicated the shrine to the Father and Teacher of youth, Don Bosco. He also prayed that the youth and the Catholic faithful of the Diocese of Kundiawa, Simbu Province, be guided by Don Bosco.

The liturgy in the newly dedicated shrine of Don Bosco was animated by the students of Don Bosco in their respective provincial and regional groups. The Eucharistic celebration and the opening, along with the blessing and dedication of the shrine, ended with speeches from Most Rev. Bishop Anton Bal, Member for Kerowagi District Bari Palma, the former member for Kerowagi District Mr. Camillus Dagma, and the principal and Rector of Don Bosco Simbu Technical College. All expressed their thanks for the tireless work of building the shrine as it would be the highlight of religious activities, not only for the college, but for everyone in the region.

The Don Bosco shrine is the biggest church building in Simbu Province and in the Highlands Region. It was built with the tireless effort of an Indian architect and designer, Mr. Vavachan, and his core workers along with the Don Bosco Community. The program was an eye-opener to the surrounding communities, districts, provinces and the people of Papua New Guinea. It has brought many people together to rejoice and celebrate in the newly built shrine.

In the days immediately preceding the blessing and devotion of the sanctuary, Simbu's Don Bosco Technical Institute hosted the traditional “Cultural Performance Biennial” with the participation of many children and young people who gave rise to a grand festival of the arts.