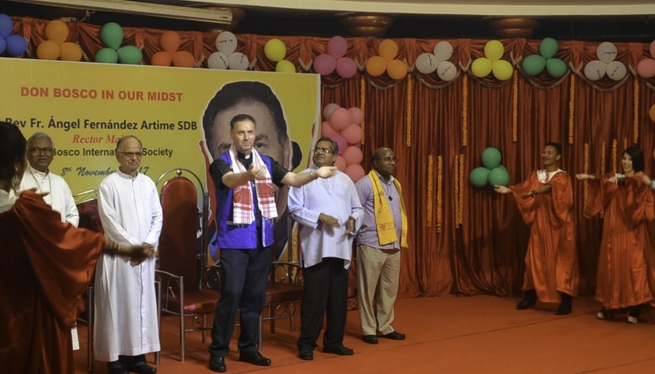 (ANS – Guwahati) – The Rector Major, Fr Angel Fernandez Artime, SDB, arrived yesterday, November 8, on a three-day animation visit to Guwahati Province (ING), following a brief visit to Bangalore. On his arrival, he was accorded a ceremonial welcome at Don Bosco Institute, Kharghuli, and homaged by, among others, Fr Thomas Vattathara (VM), the Provincial of Guwahati.

While addressing the colorful and enthusiastic audience, the Rector Major expressed his immense happiness on being in the region known for its rich and diverse culture, language and people. The Rector Major was stunned at the rousing reception he received. “It moves me very much to be here with all the young people with so much cultural beauty - well done! benissimo...excellent...molto bene...grazie,” he said looking at the jubilant young crowd.

He was full of appreciation for the youth and the amazing performance exhibited. “You young people are the reason for the existence of the Salesian Family,” he said, adding, “The formation you have received in the Salesian house is a guarantee for your future and the future of your country.”

Fr Thomas Vattathara, the Provincial, thanked the Rector Major for embarking on his historic visit to the Guwahati Region. He said the visit “is indeed a blessing, a historic occasion; and it is a grace-filled moment in,” what he defined as, “the land of a hundred tongues, a hundred tribes and a hundred cultures... the land of exotic flora and fauna.”

Msg Thomas Menamparampil, Archbishop emeritus of Guwahati Archdiocese, said, “we all share the joy of Don Bosco. The joy that we have should not be inward-looking, resting within ourselves, but outward-looking, being shared with others.” He concluded by saying the Rector Major brought with him “the message of joy from the land of Don Bosco, Rome, and therefore we should live in that joy and optimism.”

The ceremony ended with a concert by Sunita Bhuyan, a well-known violinist, who played the ‘Ave Maria’ and a beautiful Assamese tune, the audience enthralled by her scintillating performance.

Fr Johnson Parackal, Don Bosco Institute's Executive Director, in the concluding remarks expressed his immense gratitude and deep appreciation to the Rector Major and all those present at the historic function to mark the visit of the 10th successor of Don Bosco to Guwahati.

Photos and videos of the Visit are available on ANSFlickr.