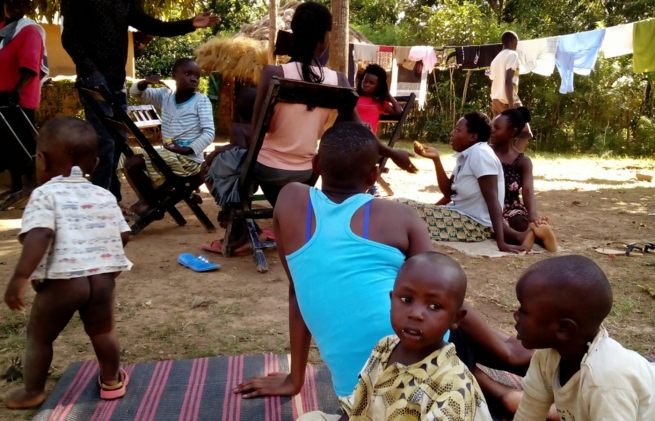 (ANS - Palabek) – As violence escalates in South Sudan, the world's youngest nation, refugees fleeing fights gather over the border in northern Uganda to ask God for peace. Salesian missionaries have opened five chapels in the Palabek Refugee Camp in northern Uganda, and minister to the refugees who have fled violence in their homeland.

They sing hymns and sometimes recite the rosary. Others fall to their knees and weep in prayer in the new chapels established under trees because shelter is scarce. Their pews are planks of wood or logs dug into the ground. "We are praying daily because we want God to hear and forgive us," said catechist Peter Jok, a South Sudanese refugee who works in one of five chapels that Salesian missionaries have opened in the Palabek camp in northern Uganda. "The suffering we are going through will come to an end one day because God is going to intervene."

About 34,000 South Sudanese refugees live in Palabek. The ministries offered in the chapels bring hope and unify the migrants, including those who have lost loved ones in the civil war.

The Salesians run St. John Bosco, Mary Help of Christians, Holy Cross, Daniel Comboni and Mother Teresa chapels. Catholic Masses are celebrated in them; women and children use the buildings as community centers.

"We had lost hope as people of South Sudan, but the church is restoring it," said Pauline Aluel, a mother of three who arrived in the camp in April after government soldiers attacked her town of Pajok and murdered her husband. "I have been having bad dreams about the people I saw being murdered. But the church has helped me to overcome it. I can now recite a rosary and all my problems are solved."

The newly appointed Salesian chaplain of the refugees in the archdiocese said his order's missionaries were helping the refugees in peace-building activities, spiritual and agricultural practices to improve their lives.

"We are working to provide inspiration and hope to internally displaced people here and around the world," he said. "We also help poor youth and their families through education."

South Sudan gained its independence from Sudan in July 2011, after decades of war. But two years later, the new nation of 11 million people became embroiled in a new phase of fights within its own borders. Tens of thousands have been killed, and more than 1 million people have been forced to flee to neighboring Uganda alone. Upward of another million have sought refuge elsewhere in the region. Catholic bishops in Uganda have urged priests to visit the camps and provide pastoral care.