Brazil - A new chapel in honor of "Divine Mercy" 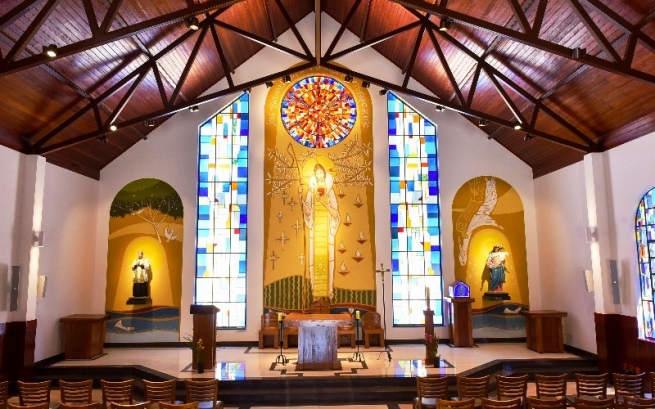 (ANS - Campos do Jordão) - The Salesian Province "Mary Help of Christians" can count on a new place to profess faith and celebrate the Eucharist: in the afternoon of Wednesday, November 8, the chapel was inaugurated in honor of the "Divine Mercy" in Vila Don Bosco, Campos do Jordão.

For many years, the Salesians have been wishing to build it, but its construction received two last decisive impulses forwards due the Holy Year of Mercy and the 300 years since the find and discovery of the statue of the Virgin of Aparecida, Patroness of Brazil. The inauguration took place with the Eucharistic celebration presided by the Provincial of Brazil-Sao Paulo, Fr Edson Donizetti Castilho.

The chapel was built by Nazs Engenharia. The exterior follows the “semi-finished” architectural style brought to Brazil by German emigrants, a style present in many of the city's buildings, including the main building of Vila Don Bosco itself. A rosette with the image of the Lamb welcomes those arriving from the front, thus signaling the presence of a place of Christian worship.

The new prayer house is rich in liturgical and symbolic elements with particular attention to the area of the altar, curated by the artist Lúcio Américo, and the windows.

There are three main subjects the faithful can observe in the background: the central panel shows Jesus, the Good Shepherd; in his hand, He holds a stick, as a guide and directional tool, but for Him, it sprouts: it represents the Tree of Life.

On the left, there is the statue of Don Bosco. The golden background behind the altar derives from the central panel with Jesus at its center, a sign that Life comes only from Him.

On the opposite side, finally, is the statue of Mary Help of Christians, immersed in the inexhaustible source of her Son's life. Here, the presence of the angel who comes to her, bringing her the divine vocation to be the Mother of the Lord.