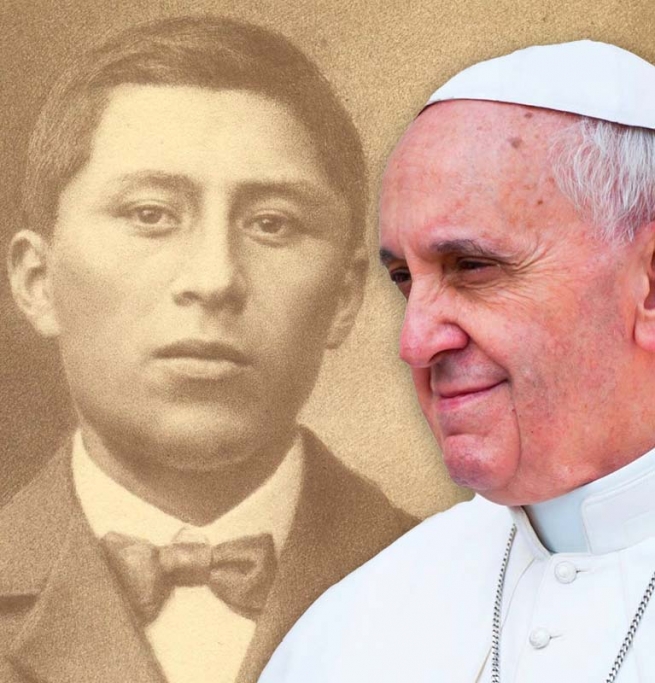 (ANS - Vatican City) - "It makes me feel very good to think of Ceferino's desire to be a priest to serve his people. That is how it must be. The priest always identified with his people in such a way that his time, his life, and his person are for his brothers." With these words, in a letter to the Argentine bishop of Viedma, Mgr. Esteban María Laxague, SDB, Pope Francis recalled Ceferino Namuncurá, son of the Mapuche people, who embraced the faith in Jesus Christ and the Salesian Family, and died of tuberculosis in Rome in 1905, at only 19 years of age.

In the letter, sent on the 10th anniversary of Ceferino's beatification (11 November 2007) and the 131st anniversary of his birth (August 26, 1886), the Pontiff described the ceremony of beatification: "I was impressed by that crowd of people coming from different areas, and those faces filled with joy for the beatification of one of their own, one who had never forgotten his roots, his people, his culture."

In addition to praising Ceferino Namuncura's desire to be a priest at the service of his people, in his letter the Pope emphasizes that "youth know how to answer with generosity when Christ is presented them with a testimony of authentic and truthful life, such as Ceferino's." And he adds, a wish, "that many young people today find in Jesus the love of their lives and the impetus to give of themselves to others."

Blessed Ceferino Namuncurá represents the most convincing proof of the fidelity with which the first missionaries sent by Don Bosco could repeat what Don Bosco had done in the Oratory of Valdocco: forming young saints. The formation received was part of an educational process based on the Preventive System, but what launched it towards the highest peaks was to learn about the life of Domenico Savio, of whom he was a ardent imitator, and the first Communion by which he made a covenant of absolute fidelity with Jesus, his great friend.