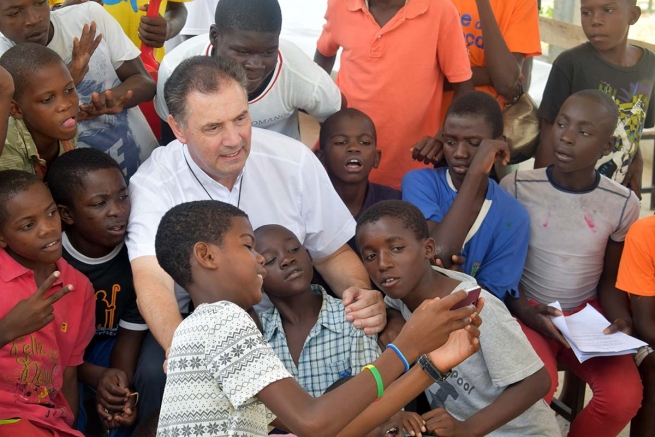 (ANS - Luanda) – Having arrived in Benguela on Friday, 17 November, the Rector Major, Fr Ángel Fernández Artime, then spent the next three days bringing his encouragement, as the Successor of Don Bosco, to the young people and the Salesian Family of Angola.

Accompanied by his Secretary, Fr Horacio López, and Angola's Salesian Provincial, Fr Víctor Sequeira, the X Successor of Don Bosco was received at the airport by the children and the youth band of the "Our Lady of the Navigators" Salesian center; he was escorted to the Salesian house, where he met with the Salesians and the Salesian Family, for whom he celebrated the Eucharist.

The next day, November 18, Fr Á.F. Artime reached Angola's capital, Luanda, but not before commemorating Mass, again in the Benguela house, where he welcomed the promise of a Salesian Cooperator.

The first stop in Luanda was the Palanca center where the Rector Major was greeted by over a thousand young people from all the country's Salesian houses, who had long prepared a full welcome program of events for the visit. After having paternally conversed with them, the X Successor of Don Bosco concluded the day by visiting the provincial community of the Daughters of Mary Help of Christians in Angola.

The morning of Sunday, 19, was marked by two different moments: first, the solemn Eucharist presided by the Rector Major at the Salesian community of "São José de Nazaré", concelebrated by Fr Sequeira and numerous other Salesian priests, with over 5,000 faithful present, including many representatives of the local Salesian Family; then, there was an extremely emotional encounter between Fr Á.F. Artime and the 40 socially-at-risk children being housed at the Salesian Institute "Mama Margarida."

The Rector Major spoke with great warmth and affection with both the children and their educators. He then, much-pleased, listened to the poetry recited by a child guest of the center, a poem inspired by the child's own life as a child-at-risk; the Rector Major then gladly accepted the gift of a statue of a fisherman sculpted by another child, yet one more demonstration of the skills the children learn at the Salesian House.

In the afternoon, the X Successor of Don Bosco had a new meeting with representatives of the local Salesian Family.