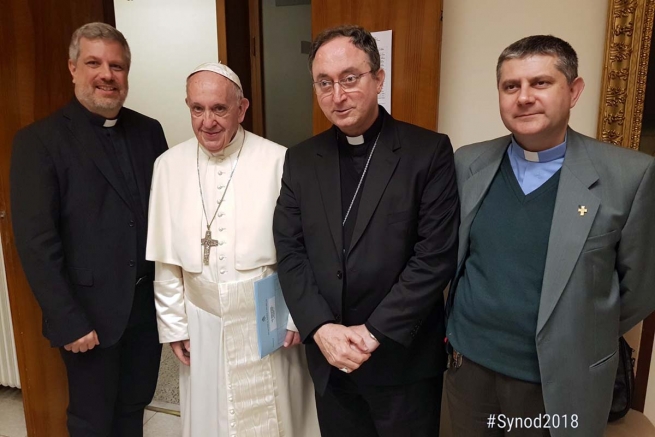 (ANS - Vatican City) - Pope Francis has appointed a General Rapporteur and two Special Secretaries for the 2018 Synod, which is dedicated to young people: Cardinal Sérgio Rocha, Archbishop of Brasilia; and Fr Giacomo Costa, SJ, and Fr Rossano Sala, SDB. The appointments took place at the end of the 16-17 November meeting of the Council of the General Secretariat of the Synod of Bishops.

Announcing the nomination, the General Secretariat of the Synod of Bishops explained that "the appointment of two Special Secretaries conforms to Article 14 § 3 of the Ordo Synod Episcoporum" (see Can. 348 § 2 of C.I.C.)

Cardinal Sérgio Rocha was made Cardinal by Pope Francis in his third consistory, held on 19 November, 2016. Fr Giacomo Costa, Jesuit, has been Director of the journal Aggiornamenti Sociali since 2010, and is considered among those consulted in writing the encyclical Laudato Sì.

Fr Rossano Sala has been a Salesian since 1992 and a priest since 2000. For four years, he served his pastoral-educational ministry in the Salesian house of Bologna, and for six years he was Director and Principal of Brescia's Salesian center. Licensed in "Sacred Theology" in 2002 at the Interregional Theological Faculty in Milan, in 2012 he received his doctorate in "Sacred Theology" at the same Faculty.

He taught "Fundamental Theology" at the Studentato Teologico salesiano in Turin-Crocetta. Since 2011, he has been part of the academic community of the Salesian Pontifical University of Rome. In 2016, he was appointed Director of the magazine Note di Pastorale Giovanile.

"This assignment as Special Secretary is a sign of confidence in the Salesian Family," Fr Sala told ANS. "It is a task that comes from the Holy Father to be of help and support in the preparation of the Synod and, above all, to closely accompany Cardinal Rocha."