Spain - Fr Juan Carlos Pérez Godoy, SDB: "The first emotion is born in the heart of the educator" 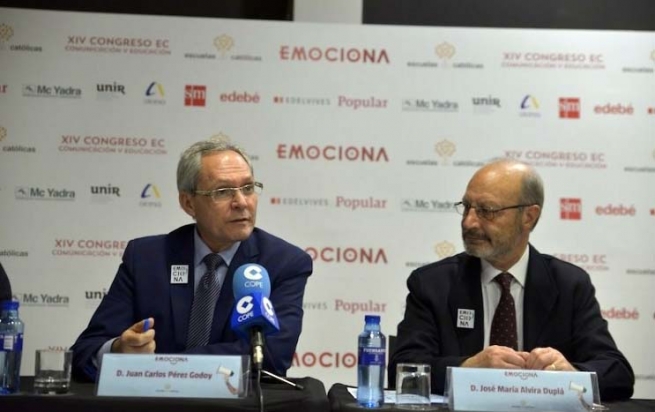 (ANS - Oviedo) – The Catholic Schools of Spain - (FTE-CECA) and (EyG) - held their XIV Congress in Oviedo. It focused on the topic of communication and its influence in the field of education. Organized by the leaders of the national Catholic schools and the Catholic schools of Asturias, the 16-18 November event gathered over 1,600 people, including principals, teachers and other figures from the world of education. Fr Juan Carlos Pérez Godoy, SDB, Superior of “St. James Major” and President of the Catholic Schools in Spain, inaugurated and closed the event.

There were three objectives, said Fr Godoy: to deepen the sense of belonging to Catholic schools; to express what the Catholic schools are, to make them known and acknowledged by public institutions and the Church; and to recognize that educating is communicating, education is meeting. "There is no meeting without communication; if it wants to be effective, it must touch the heart," said the Salesian recalling the words Pope Francis entrusted to the Salesian Congregation: "to be among the young with the language they understand best, that of the heart."

The Secretary General of the Catholic Schools, José Maria Alvira, explained the choice of the theme of the Congress on communication. "Talking about education is talking about communication," he said, adding that today more than ever "both the content of the message and how it is transmitted between teachers, students, and families are important." In relation to the slogan of the Congress - "Emoziona" - he added that "communication reaches the affections," and for this reason, "it must be a message that arouses emotions."

Carlos Robla, Secretary of the Catholic Schools of Asturias, said it was a pleasure to have lived the three days of the congress which, he said, "reminds us all that we are here, that the Catholic school in Asturias has been around since the end of the 19th century when the first religious institutions arrived in the mining areas to offer the population access to culture."

During the three-day congress, speakers from various parts of Europe each presented their papers. The Director of the XIV Congress, Victoria Moya, and Fr Pérez Godoy, closed the congress throughout which the importance of practicing emotional communication was clearly demonstrated, communication geared to the needs of the students and the present time in which we live.

"The first emotion is born in the heart of the educator in silently contemplating every single pupil," concluded the Salesian.