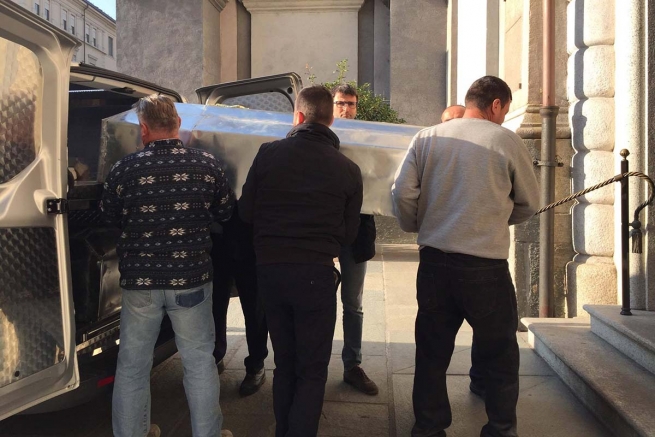 (ANS - Turin) - The mortal remains of Fr Luigi Ricceri, Fr Egidio Viganò, Fr Juan Edmundo Vecchi - respectively, the sixth, seventh and eighth successors of Don Bosco - arrived in Valdocco on the afternoon of Monday, November 20. Their remains lay in the Salesian cemetery at the Catacombs of San Callisto, Rome, until the morning of Saturday, 18 November, when they started their journey from the capital to Turin; in Turin, a delegation from the Community of Mary Help of Christians arranged for their placement inside the dedicated wing, namely, in the Chapel of the Relics of the Basilica of Mary Help of Christians.

The initiative, commenced by Fr Pascual Chávez Villanueva, is still in the process of being completed, and will allow the aforementioned remains to lie near those of Don Bosco, Fr Michele Rua, Fr Filippo Rinaldi, and the other Rector Majors.

The meaning of this transfer lies in the desire to collect the Successors of Don Bosco with their founding father in one place; he now lies in the bronze urn at the altar dedicated to him within the Marian shrine in Valdocco, where Don Bosco lived with his first confreres, and where he began his untiring pastoral work with the many children and teens who would come to the Valdocco courtyard.

On this site, evocative and holy, the Salesian Congregation had its start in truly concrete terms, and thanks to this transfer, the faithful and pilgrims shall be able to immediately perceive the enormous historical legacy to which each Successor of Don Bosco, and each Salesian, is bound.