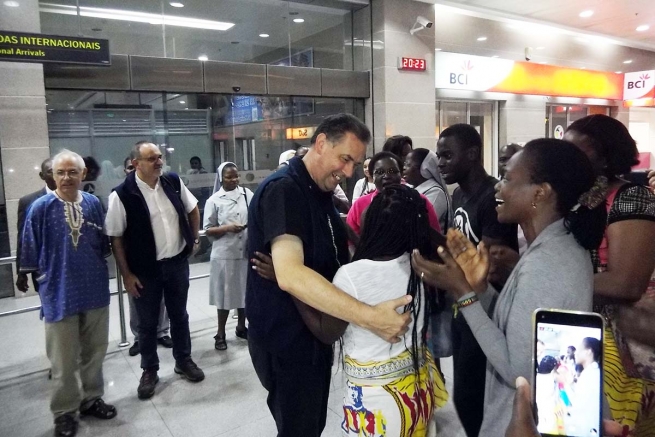 (ANS - Maputo) – These days, with the slogan "Don Bosco Among Us!",  Mozambique's Salesian Family is experiencing moments of festive celebration for the presence of Rector Major Fr Ángel Fernández Artime, X Successor of Don Bosco, on his Animation Visit to the country.

"Finally, Don Bosco is among us." With these words, the Rector Major was welcomed in Maputo, the capital of Mozambique, on the evening of 21 November. It was exactly 20:20 local time when Fr Á.F. Artime, arriving from Angola, and accompanied by his secretary, Fr Horacio López, left the airport and received the first homages from Fr Américo Chaquisse, Councilor for the Salesian region of Africa-Madagascar; Fr Marco Biaggi, Superior of "Mary Help of Christians" Vice Province of Mozambique; Sr Zvonka Mikec, Superior of the Daughters of Mary Help of Christians (FMA) in Mozambique; and other Salesian religious and FMA.

From the very first moments, the distinguished guest was celebrated via a display of singing, dancing, and homages by various members of the Salesian Family – especially from the many young of the Salesian Youth Movement and animators of the capital's Salesian oratories, as well as by various representatives of the Association of Mary Help of Christians (ADMA), Past Pupils of Don Bosco, and Salesian Cooperators.

On 22 November, the Rector Major visited the Tete Province, in the center of the country, where he met with the community of “São Paulo” of Chithatha and learned about its special project to combat poverty, which the Salesians have developed in collaboration with Caritas of the United Kingdom, in the Moatize district. Always at Moatize, Fr Á.F. Artime shall have the opportunity to meet the staff animating "Radio Don Bosco", and to celebrate the Eucharist for the local people.

Available on ANSFlickr, photo and video of the Animation Visit.