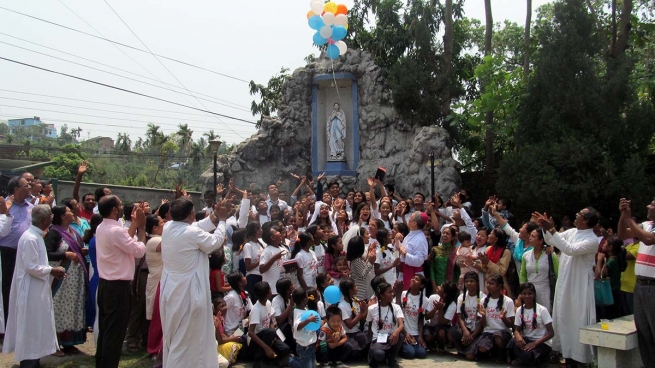 (ANS - Biratnagar) - 1992-2017: 25 years of Salesian presence in Nepal. The anniversary brought together more than 30 Salesians, as many diocesan priests and other active congregations in Nepal, and over 500 Catholics in a thanksgiving celebration to God, celebrated on 11 November at the Don Bosco Institute in Biratnagar.

Monsignor Paul Simik, Apostolic Vicar of Nepal, presided over the festivities, culminating in a solemn Eucharist. Among other prominent guests: Fr Nirmol Gomes, Superior of the Salesian Province of Calcutta - from which the Salesian houses in Nepal depend upon - and Fr T.C. George SDB, Delegate for Missionary Animation in South Asia.

The history of the Salesians in the country began in 1992 with the house of Dharan, in eastern Nepal, initiated by Fr George Alakulam. The Sons of Don Bosco then reached Sirsia (1996), followed by the capital, Kathmandu, with two centers - in Lubhu, established in 1996 and erected in 2000, and Thecho in 2001 – after which came Baroul and Chakkarghatty (2014) and, finally, Biratnagar in 2017 for a total of seven houses, animated today by 18 Salesians.

A glimpse of the blossoming of the Salesian charism in Nepal shows the Sons of Don Bosco engaged in a variety of ministries dedicated to the country's young people and faithful: two technical schools, four academic schools, three parishes, four boarding houses, several centers of non-formal education, a minor seminary, and a number of social programs, such as scholarships for students and emergency response projects – the aftermath of the tragic earthquakes of 2015, for example.

To this end, the Salesians, together with their vocational training students, have provided for the reconstruction of ten government schools, work funded by benefactors from all over the world, and carried out in close collaboration with the Nepal Reconstruction Authority.

The reality in which the Salesians operate today is that of working in a largely Hindu country, with just 7,000 Catholics out of approximately 29 million people. At the socio-political level in Nepal, a multiparty democracy under the monarchy was born in the 1990s after a period of political turmoil and constitutional changes. The 1991 Constitution granted the freedom to practice one's religion and, in memory of the first church built by the Capuchin three hundred years ago, a new church was erected in Kathmandu in 1995 under the title of Assumption of Mary.

"Nepal has been a periphery for too long and now needs proactive leaders, prophets and missionaries, dreamers, who are courageous and dedicated to disinterested service," the Salesians in Nepal comment today. "We can still hear Don Bosco's voice through the Rector Major's invitation to all the Salesians in the South Asia region. 'To you I ask for a strong missionary appeal in favor of our Salesian presence in Nepal (...) This is a good opportunity that we cannot ignore (...) It is a favorable opportunity for Don Bosco to reach our most abandoned brothers and sisters, who have greater needs, in the periphery of society.'"

"An answer to this summons could be the best gift for the anniversary," the Salesians conclude.