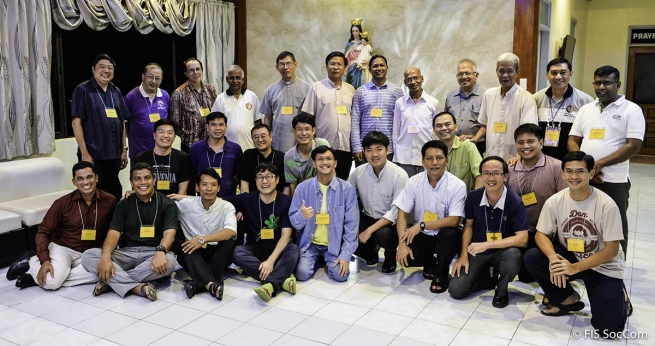 (ANS – Cebu) – Participants for the Prenovitiate Directors Formation Course from the EAO and South Asia Region started arriving to the Don Bosco Retreat House, Cebu, this past 17 November for Part One of the aforesaid course scheduled 18-22 November. The second and final session was held on 24-27 November.

There were 23 participants from 10 EAO and 5 SA provinces, and were joined by 6 confreres, formators from FIS province, with 7 novices. The EAO provinces decided to send not only their prenovitiate directors, but also team members. Not everyone from the South Asia region could, however, participate due to difficulties in obtaining visas. Nevertheless, they would be kept updated.

Fr Godo Atienza, FIS provincial, welcomed participants during dinner with the confreres of the house and novices who prepared the much-appreciated program.

The topics covered during the first five days were:

The second part of the course started with a Salesian and cultural immersion and ended with a session at “Don Bosco Pasil”, which is situated at the very center of an extremely poor community.

The next few days saw the participants back at the conference hall for the second part of the formation sessions. Topics covered during the four days were:

There were some recommendations to the Formation Department regarding prenovitiate formation that is little emphasized in the Salesian “Ratio”, such as the value of Sacred Scriptures and manual work, two values that are invaluable in Salesian life and formation.

It was also recommended that the Formation Department continue the process of preparing formators for Formation.

On the part of the prenovitiate directors, it was resolved they share their experiences with their co-formators and help guide the provincial and his council in the process of reflection at this important stage of formation.