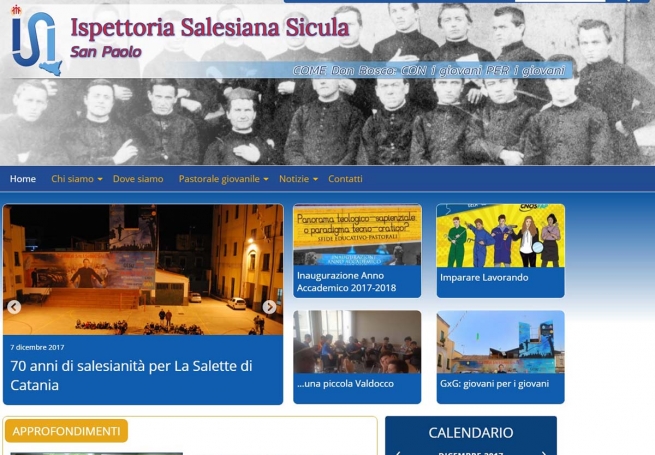 (ANS - Catania) - Last Friday, December 8, the new official website of the Salesians of Sicily and Tunisia (ISI) was officially inaugurated. The website - www.sdbsicilia.org - has been renewed in its layout and enriched in content; it is the result of team work and expresses the desire to offer a pastoral image of the Province, and to become increasingly more  "everyone's home", #nessunoescluso, that is, nobody excluded.

The new portal has started ... but work has yet to finish! In the forthcoming months, the website will be enriched of many services and content until it truly becomes a privileged channel of communication, formation, animation and evangelization. Comments and suggestions are welcome, and every contribution and suggestion will be much appreciated and taken into consideration. The provincial Social Communication team invites all those with whom, and for whom, its meant to visit the website and to express comments to: This email address is being protected from spambots. You need JavaScript enabled to view it.

"As Salesians of Sicily and Tunisia," added Fr Ruta, "we are committed to speaking of Christ that effectively speaks to today's young people with the same yearning for the Church by interpreting 'their joys and hopes, their sorrows and anguish' (GS 1 ), and doing so with the same ardor of Don Bosco, continuing thus his work of building a society suitable to the young wherein all feel as brothers and sisters on their path to God. We are called to re-place ourselves in a new presence, not located in a physical space, but seen as migrating from one place to another, because where there is a young person, there we are called to be with the same heart of Don Bosco."

"We hope that this new courtyard, which arises from our daily need to communicate, is an effective echo of the desire to be 'signs and bearers of God's love for young people' (Const. 2), and enthusiastic announcers of the evangelii gaudium," concluded the Provincial, offering his best wishes for the new site.