India – Father Tom Uzhunnalil, SDB receives the Mother Teresa Memorial Award for his bravery and resilience in the face of adversity 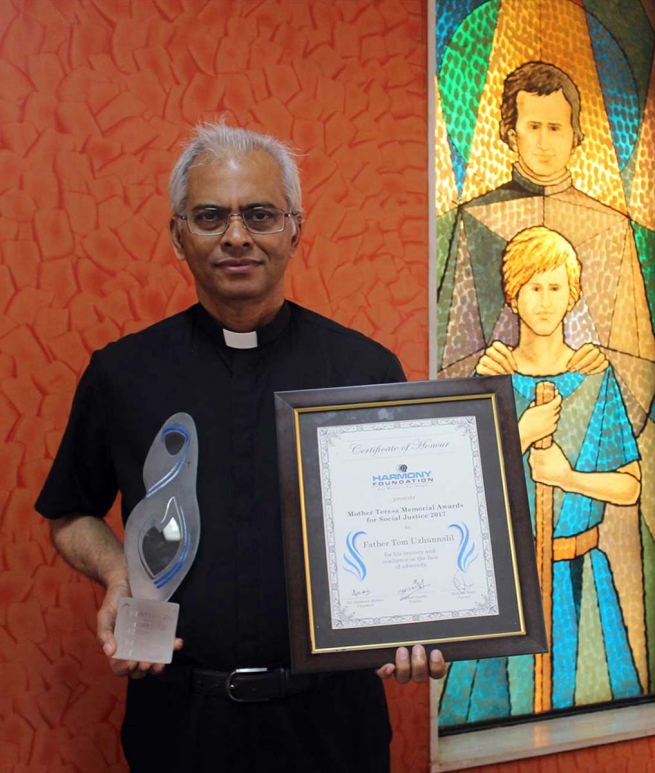 (ANS – Mumbai) – Father Tom Uzhunnalil, a Salesian from the Province of Bangalore abducted in Aden in 2016 and released in September is awarded the Mother Teresa Memorial Award 2017 for Social Justice by the Harmony Foundation on 10th December, 2017 at the JW Marriott hotel, Sahar, Mumbai, India.

This year's theme is ''Compassion across borders - a compassionate response to the refugee crisis.'' Father Tom ''has shown dedication and commitment to a place of great danger.'' Abraham Mathai, president of the Harmony Foundation, a Mumbai based organization that commemorates the Saint of Calcutta with the award since 2007,  felicitated Father Tom and presented him with a citation and the memento for his bravery and resilence in the face of adversity. Father Tom worked in Yemen together with the Missionaries of Charity - the Congregation founded by Mother Teresa - and was abducted on March 4, 2016, while inside one of their centers, where four religious sisters died in the attack. His fellow priest Father M K George who worked with him in Yemen was present during the award ceremony.

He was chosen ''for the inspiring example of compassionate humanity, and for having continued to work for the elders of the Missionaries of Charity in Yemen, despite having had the opportunity to leave the country. We praise Fr Tom's dedication and commitment for work in a location of great danger, where his colleagues were murdered in cold blood,'' said the foundation in a written statement.

The Harmony Foundation, founded in 2005 to promote and spread ideas of peace, dialogue and community support without distinction of religion, caste, gender or ethnicity, has in the past awarded the prize to individuals and organizations committed to human rights, such as the Dalai Lama, Doctors Without Borders, and the very young Nobel Peace Prize Malala Yousafzai.  This year the awards were given to Mr Shigeru Ban, UNHCR, IsroAID, Bayat Foundation, Caritas International, Mercy Corps and Hellenic Resource Team along with a few more eminent personalities.

Meanwhile, Father Tom is still engaged in official activities in India, and in Kerala, his state of origin. In each of his scheduled events so far, the Salesian continues to surprise for his clear and peaceful Christian testimony, and for his declared willingness to carry out God's plan for his life in the future.  He thanked the Harmony Foundation for having felicitated him . ''Thanks for all your constant prayers.  There is goodness in everyone, it is only through love and forgiveness we witness peace and we need to forgive our enemies. I believe in a Living God who has called me to be a witness to HIM.'' said he.