Malaysia - Living the Advent on the frontiers of the mission 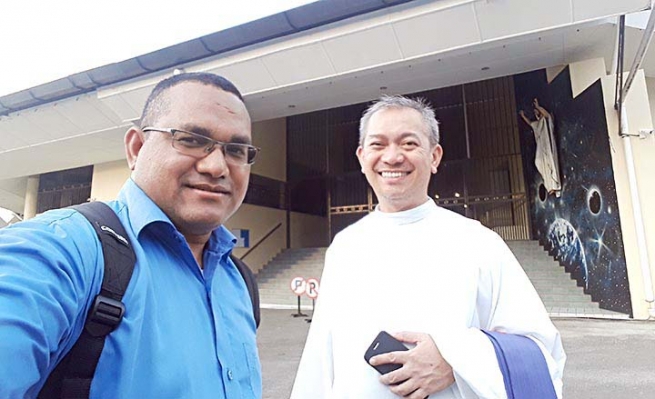 (ANS - Kuching) - Advent is a period of special spiritual preparation for the Christian faithful everywhere. "The Church, celebrating the liturgy of Advent every year, actualizes this expectation of the Messiah: by putting oneself in communion with the long preparation of the first coming of the Savior, the faithful revive their ardent desire of his second coming" (Catechism of the Catholic Church , 524). This Advent is made even more special in the region of Kuching, State of Sarawak, Malaysia, where one of the new Salesian missionary frontiers is taking shape.

Fr Andre Belo, SDB, originally from East Timor, is one of the first pioneers assigned to this mission. In this early phase, he is collaborating closely with the archdiocese. And during the time of this Advent, Fr Belo was asked to help diocesan priests in confessions.

On Sunday 3 December, Fr Belo fulfilled this ministry in the cathedral of Kuching. Since December 6, however, he has moved to the "St Stephen" parish in Bau, about 30 km from Kuching, where he goes to the villages with three or four other priests every afternoon. "I see so many people taking advantage of the presence of priests and coming to confess to us. Sometimes it takes 2 hours to listen to everyone," wrote the Salesian directly from the mission.

As a missionary priest, Fr Belo also celebrates the Eucharist in the villages. "Thank God, I can already say Mass in Bidayuh, the local language, even if I still preach the homily in Malay Bahasa. However, I am learning Bidayuh and I hope that soon I will also know how to preach in that language," he added.

"In general, I can say that the faithful are enthusiastic in waiting for the Lord's coming, of Christmas, and they are also preparing themselves also spiritually to welcome Him. They clean and decorate their houses, chapels and churches; so too they clean their hearts for the coming of God," Fr Belo says to conclude his missionary account.

Fr Belo is one of the three missionaries who left with the 148th Salesian Missionary Expedition in September 2017 to establish the Salesian presence in Malaysia. Fr Ramon Borja, Filippino, and the young Spanish Salesian Coadjutor Manuel Ruperez also left with him.

In his appeal sent to the entire Congregation for the Feast of the Immaculate Conception, the Rector Major referred precisely to the frontier of Malaysia as one of the new sites to be provided with missionary generosity.