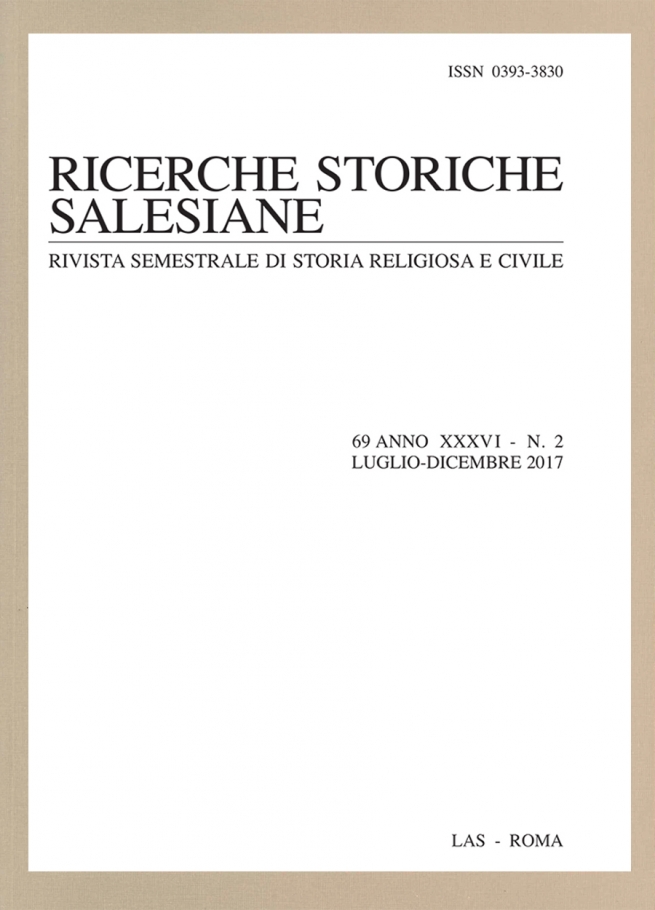 In STUDIES, there are the following three essays:

Yánkuam ', anthropologists and missionaries is the study of Antonino Colajanni, Anthropologist, former professor at the University of Rome "La Sapienza". The essay is a critical study of the personality, work and thought of the Salesian missionary Luigi Bolla (1932-2013), called Yánkuam by the indigenous Achuar. The author draws on personal memories, interviews and correspondences, and presents observations on the man, on his working method, on innovative proposals for missionary action, on his anthropological curiosity, on the argumentative and listening attitude, on the extraordinary ability to adapt the Gospel to the simple things of life and to the production of knowledge.

Don Bosco revisited in the light of some letters published in the new epistolary is a contribution made by prof. Fr Francesco Motto, emeritus Director of the ISS. In it, we read that in the light of new sources or new perspectives of reading the sources already known, historians are called to a continuous review of the results achieved. Several unpublished letters open up new glimpses on the "being and work" of Don Bosco.

The Venerable Simone Srugi Salesian coadjutor (Nazareth 1877 - Betgamàl 1943). Historical-spiritual profile is the research of prof. Fr Giovanni Caputa, professor emeritus at the Faculty of Theology of the UPS in Cremisan (Palestine) and Jerusalem (Israel) offices. This brief research paper revisits the first biography of Simone Srugi, broadens the historical picture on the basis of other archival documents (of which a complete inventory is made) and of some recent publications. It also traces the relationship between the "little world" of the Salesian house of Betgamàl and the contemporary events of world and regional history.

In the FONTI or SOURCES section: The Regulations of the Compagnia di San Luigi Gonzaga compiled by Don Bosco (1847). A critical edition by Rodolfo Bogotto. The text returns to the origins of the Oratory of Valdocco (spring 1847) during which the young Don Bosco faced different types of poor and abandoned young people. Building on the experiences of educator priests, he draws up regulations and guidelines to encourage the creation of a youth association among the oratorians, whose cornerstone is Article 1: "avoid anything that can cause scandal" and "give a good example everywhere."

The volume is completed by several references listed in the NOTE, Reviews and