Spain - "Accompany me?" Formation for educators 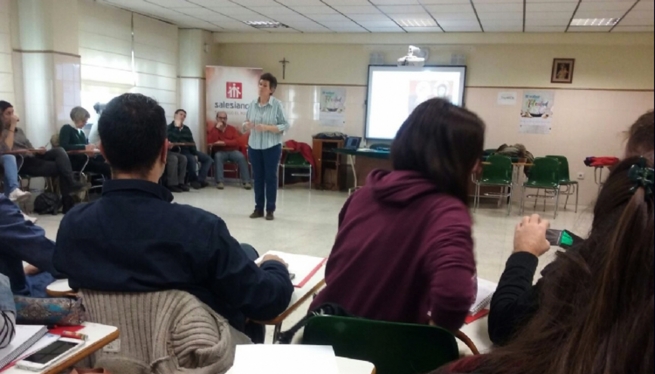 (ANS - Madrid) – For December, the "Spain-Saint James Major" (SSM) Province organized its Level II Training Course on Accompaniment. It is a course that is absolutely consonant with,  the Rector Major's Strenna for 2018 which emphasizes the relationship of educators towards young people, and invites us to focus on two fundamental aspects that become educational: listening and accompanying. Accompanying young people is certainly a commitment, but is, above all, an art learned in time, with reflection, study and prayer with God.

The formation session also took place in Madrid, for the centers of that zone, and in Santander, for those in the north of the Province. During the workshops, three themes were discussed and explored: "accompaniment in youth ministry"; "Salesian accompaniment"; "the quality of the inter-relationship of the accompanying person to the accompanied."

In the evaluations, of note were the broad scope of discussions, the many questions still to be resolved, the desire to prepare well in this pastoral ministry, and the opportunity and relevance of this work for the animation of Salesian educational and pastoral communities.

The Rector Major stressed that Strenna 2018, in relation to the upcoming Synod of Bishops on the theme "Youth, Faith and Vocational Discernment", is intended to be a point of reference to "an issue that fully affects the most essential aspects of our charism and for which it is necessary to prepare oneself in the best possible way, and that is, "to learn and know how to accompany young people."

For the Madrid area, a total of 39 people began this specific formation course, all persons wishing to better qualify their educational-pastoral actions in the field of pastoral accompaniment. Added to these were 33 pastoral workers who made the same journey to Santander, to respond, for the fifth year, to a need that is felt increasingly urgent in Salesian houses.

An example, some of the participants expressed their concern: "we are very good at animating environments and working with groups, but we lack the one-to-one relationship, which qualifies and completes all pastoral work."

"The motto chosen for 2018," stated the Rector Major, "which I consider very direct, contains two elements of vital