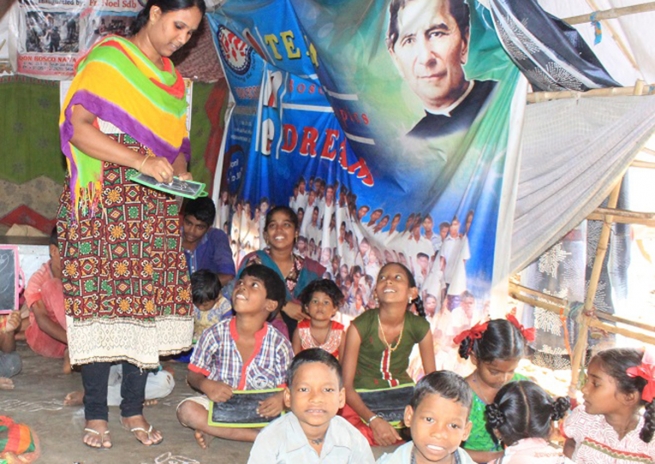 (ANS - Vishakaptnam) - State of Andra, India. In the Kacherapalem slum about 800 people live in 150 tents and huts. The shantytown has existed for 20 years and is located under a bridge near the railway. There are no toilets, no waste collection, no electricity in the houses - they use lamps or candles. Most adults recycle waste on the street, collecting plastic, glass, metal, cardboard, and sell small handicraft or fruit products. Children do not attend school because parents cannot afford it and prefer to let their children work.

The Salesians of Vishakapatnam started educational activities in the slum in December 2016, initially under a small tent. In February 2017, Massimiliano Schilirò, an Italian traveler from Gavi (Alessandria province, a few km from Mornese) visited the slum and left a small contribution with which a wooden school-hut was built. This new structure, although small, effects a greater number of children (about 60, aged between 4 and 14 years) and positively impacts the entire community. The objectives are many: to provide basic education ("school-bridge", allowing them to be integrated into the Indian school system), offer one nutritious meal per day and medical assistance to the children; for young people, create an aggregation center where they can play and have fun together.

Back in Italy, Massimiliano (known in his area as "Massi on the road") started a fundraising program for the project. Through the sale of his two travel books, and various public and school readings and presentations, he collected 4,000 euros for the school-hut, which was then sent to the director, Father Ratna, via the "Don Bosco nel Mondo" Foundation.

The result: these past 10 months, about 60 boys and girls from the shantytown have had a small but clean and safe place to learn, play, eat and grow together. A number of initiatives have also been created for parents, who have thus become actively involved in the project itself.

For Christmas, Massimiliano and his friend Gaviese (the cartoonist Guzio) have created a cartoon that represents the project. In this image, simple and complex at the same time, hope is summarized in a better future, citing the words of St. Teresa of Calcutta: "Peace begins with a smile."