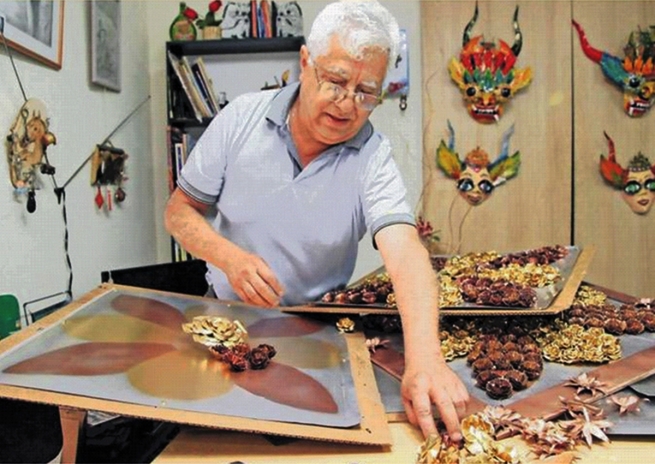 (ANS - Iquique) - From 15 to 18 January, Pope Francis will visit Chile. On the last day, he will celebrate Mass in the city of Iquique, 1700 kilometers from the capital. The Holy Father will crown the image of the Virgin of Carmen de la Tirana, being exhibited together with the images of San José, who represents the first migrant, and of San Lorenzo de Tarapaca.

Yoing Koo was appointed as architect for the altar's construction; the decoration features traditional flowers produced in aluminum called "salitrero funeral art." The production of flowers in tin is a tradition of Iquique and the surrounding areas, a region with a particularly hot climate that does not allow for fresh flowers for very long, why villagers reuse cans and other objects to compose flowers, crowns and crosses to bring their loved ones in cemeteries.

Mr. Humberto Alache, a visual arts professor and former pupil of the Salesian College Don Bosco of Iquique, is creating 12,000 flowers in the style of the traditional local funeral art to decorate the altar Pope Francis will celebrate at on January 18.
The teacher, and collaborators Aurora Cordano, Norma Araya, Yolanda Cañas, Sandra Godoy, Patricia Herrera Chacón and Silvana, have been doing an immense amount of work since October to complete the work in time.

They are creating roses and other works of art from tin cans painted in gold and copper. Inserted in 48 paintings, the flowers shall then be delivered to the institutions and parishes as testimony of Pope Francis' visit to the city.

Figures carved in the church of Tarapacá are also being prepared.

The origin of the tin flowers dates back to the time of the British who, on seeing that the natural flowers could not survive in the arid desert, began to use flowers fashioned from tin.